Why Is The Obamacare Website Not A Subject Of A Criminal Investigation?

It should be obvious to even the most casual observer that websites - any website - do not cost anywhere near three quarters of a billion dollars to... 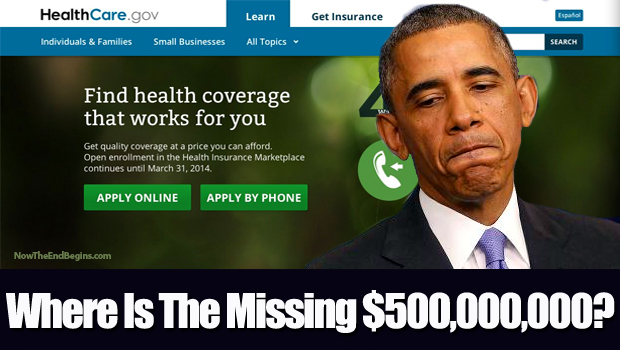 CGI Federal, which secured a $678 million no-bid contract to build the Obamacare exchange web portal, has come under increased scrutiny for ties between senior executives and the Obama administration following the disastrous rollout of the healthcare website.
by Geoffrey Grider April 30, 2014
NOW THE END BEGINS SHARE:

Either Barack Obama is the smartest criminal this country has ever produced, or the American people have become stupid beyond calculation. It should be obvious to even the most casual observer that websites – any website – do not cost anywhere near three quarters of a billion dollars to build. But, let’s imagine for a moment that the Obamacare website, even measuring by vastly over-inflated and corrupted Washington standards, cost $177 million dollars to create. Where did the other $500,000,000.00 disappear to?

CGI Federal, which secured a $678 million no-bid contract to build the Obamacare exchange web portal, should be investigated for ties between senior executives and the Obama administration following the disastrous rollout of the healthcare website.

Why is Congress not calling for an immediate investigation, opening the books and demanding an accounting for the missing half a billion dollars? Why are the American people – who actually paid for the site – not burning up their phone lines to Washington demanding the same thing? The no-bid contract to build the monstrosity was given to a college classmate of Michelle Obama’s, and no one has even batted an eye about the legitimacy of that contract. Why not? Where did the money go?

Now, the Weekly Standard is reporting that it is going to cost another $121,000,000.00 to repair it. If the American people do not demand an accounting of all costs associated with this website, then we will just have to concede that we willingly allowed Obama and his friends to steal it with our blessing.

Weekly Standard: After shelling out $677 million to build the federal health care website, the government will spend an additional $121 million in 2014 to repair it—$30 million more than previously estimated—the Washington Times reported last night. This comes just as the Obama administration is starting the hunt for next year’s diverse group of contractors.

CGI Federal, the original lead contractor awarded $93.7 million, was replaced by Accenture this past January. Accenture received an initial payment of $45 million—an amount that was supposed to doubleby year’s end, according to the Washington Post. But yesterday, Accenture Federal Services announced their final agreement of $121 million for work through January 10, 2015. source – Weekly Standard