Muslim terrorists know that Obama will simply look the other way, and hope the American people will simply forget the terrorist acts ever occurred in the first place. ... 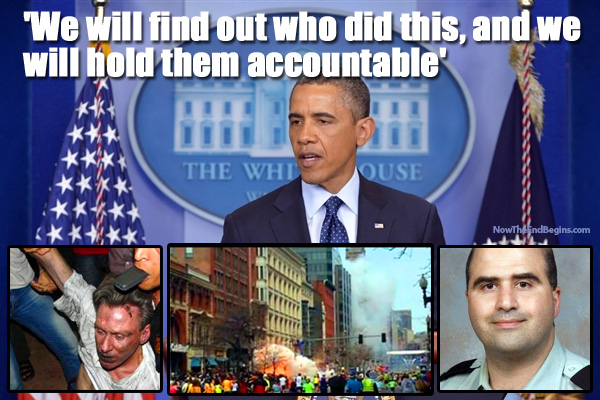 Today was a heartbreakingly-sad day in Boston. Terrorists unleashed homemade bombs on an unsuspecting Marathon crowd and the end result was murder and mayhem to an astonishingly-high degree. All the facts are not in, but since it is an act of terrorism, the likelihood of it being Muslim terrorism is quite good.

American president Barack Hussein Obama had this to say about tracking down the ones responsible for the blasts:

“We will find out who did this, and we will hold them accountable’

Oh, really…is that so? Let’s review:

8 months ago, September 11, 2012, the American Consulate in Libya was attacked by Muslim terrorists, and Obama and his White House staff sat idly by and lifted not one finger to stop it or send in reinforcements during the 9 hour firefight which claimed the lives of US Ambassador Chris Stevens, US Foreign Service Officer Sean Smith, and Navy SEALs Glen Doherty and Tyrone S. Woods. In fact, Obama’s State Department had already removed the bullets from the security detail there to protect the Consulate.

Shortly after that occurred, the Black Flag of Islam was flown over the US Embassy in Tunisia, after it was overrun by Muslim terrorists there. And then, not two full weeks after the Benghazi Massacre, Obama made this remark at the United Nations:

So when President Obama issued his sweeping rhetoric today about “finding those who did this”, you have to view the likelihood of that happening in light of everything we have just brought back to your memory about his recent handling of Muslim terrorists and Muslim terror attacks on Americans.

Remember Maj. Nidal Hasan, Muslim terrorist who killed 13 people at Ft. Hood back in 2011? Would it surprise you to learn that not only was that never declared an act of terrorism, but instead classified as ‘workplace violence’, and that Maj. Hasan STILL has not been brought to trial to answer for his crimes?

Obama’s track record for “finding those who did it and bringing them to justice”, when it comes to Muslim terrorists, weighs in at a  verified, certified ZERO percent success rate. Muslim terrorists know that Obama steadfastly refuses to do anything to avenge the attacks, and it has greatly and obviously emboldened them to the point where they feel confident in orchestrating an attack during one of the highest-profile, most-publicized outdoor events on American soil.

So as you lay your head on your pillow tonight, rest secure in the knowledge that Obama has never avenged a Muslim terror attack against Americans, and likely never will. And those who tragically died today, like the 4 dead in Benghazi, died in vain.

Muslim terrorists know that Obama will simply look the other way, and hope the American people will simply forget the terrorist acts ever occurred in the first place. That is how he operates, that is what he is counting on.

The only question is…will you forget?