Obama Supports The Anarchy In The ‘Occupy Wall Street’ Riots

Rules for radicals? Weeks after taking to the streets in Manhattan, Occupy Wall St demonstrators are camped a block from the White House. Many of them are wondering: do... 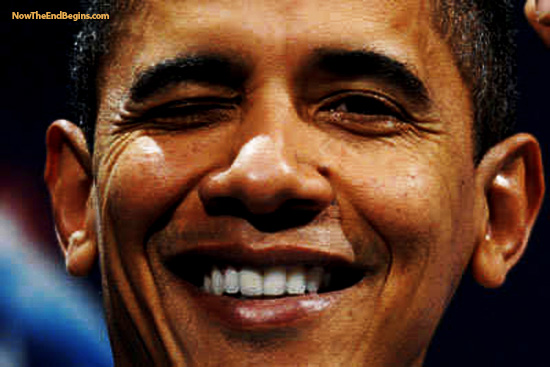 Ronald Reagan would have sent the fighter jets over Libya within 72 hours after an attack. Obama cannot muster up even enough courage to call it terrorism.
by Geoffrey Grider October 7, 2011
NOW THE END BEGINS SHARE:

If you think for one second that the protests sweeping this country with the OCCUPY MOVEMENT are legitimate, you have another thing coming. These riots are being fomented by the hard left Liberals that seek to DESTROY this country. This is the Arab Spring for America. And who is behind it all? You’re looking at him right now.

“Weeks after taking to the streets in Manhattan, Occupy Wall St demonstrators are camped a block from the White House. Many of them are wondering: do they have a friend inside?

While not endorsing the protests, Barack Obama and Joe Biden have expressed understanding of the movement that has spread rapidly across the country.

Mr Obama said people were angry because Wall Street had not been “following the rules”. His vice-president even compared the movement on Thursday to the Tea Party, the conservative movement which has upended national politics in the past two years.

“The core [of the protest] is: the bargain has been breached. The American people do not think the system is fair, or on the level,” Mr Biden said.

Underlying the protests, and the administration’s response, is the stubbornly stagnant economy that continues to sap voter confidence and challenge politicians.

On McPherson Square in Washington near the White House, the motley crew of protesters are lashing out in different directions, from corporate greed to the ballooning deficit to, above all, the political class.

“Politicians are only interested in keeping themselves employed, so they don’t make decisions for the people,” said Joe Gray, 23, from nearby Montgomery County.

The protesters are small in number, ranging at various times between a few dozen and a few hundred, and were still earnestly debating organisational minutiae on Thursday evening: should they break the law by sleeping in the park, or keep to the footpaths on its edges, which is legal?

“During the day, we just look like a bunch of out-of-work hippies,” said Miles Casey, 24, a science teacher from Arlington. But increasingly their targets are also those of the White House – what the movement calls “the 1 per cent” – wealthy Americans whose taxes Mr Obama wants to raise to pay for his programme to boost jobs. source – FT