White House sources today claimed that the First Lady has spent $10million of U.S. taxpayers' money on vacations alone in the past year. The First Lady is believed to... 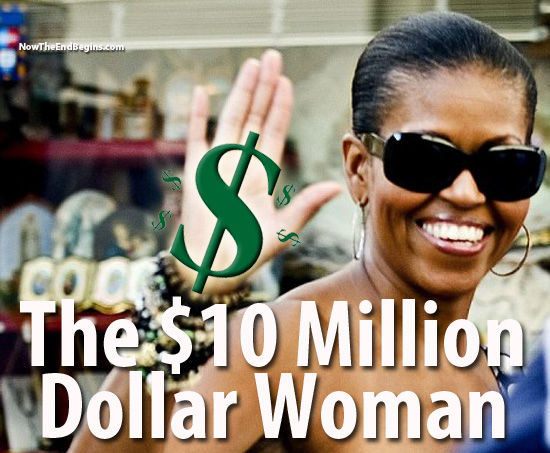 The Obamas’ summer break in Martha’s Vineyard has already been branded a PR disaster after the couple arrived four hours apart on separate government jets. But according to new reports, this is the least of their extravagances.

Travelling in style: Mrs Obama during her $375,000 trip to Spain last year

White House sources today claimed that the First Lady has spent $10million of U.S. taxpayers’ money on vacations alone in the past year.

Branding her ‘disgusting’ and ‘a vacation junkie’, they say the 47-year-old mother-of-two has been indulging in five-star hotels, where she splashes out on expensive massages and alcohol.

The ‘top source’ told the National Enquirer: ‘It’s disgusting. Michelle is taking advantage of her privileged position while the most hardworking Americans can barely afford a week or two off work.

‘When it’s all added up, she’s spent more than $10million in taxpayers’ money on her vacations.’

The First Lady is believed to have taken 42 days of holiday in the past year, including a $375,000 break in Spain and a four-day ski trip to Vail, Colorado, where she spent $2,000 a night on a suite at the Sebastian hotel.

And the first family’s nine-day stay in Martha’s Vineyard is also proving costly, with rental of the Blue Heron Farm property alone costing an estimated $50,000 a week.

The source continued: ‘Michelle also enjoys drinking expensive booze during her trips. She favours martinis with top-shelf vodka and has a taste for rich sparking wines.

‘The vacations are totally Michelle’s idea. She’s like a junkie. She can’t schedule enough getaways, and she lives from one to the next – all the while sticking it to hardworking Americans.’ source – Daily Mail UK