“It was quite a shocking experience,” said Jane Muir, awakened around 1:45 a.m. by the sound of military choppers that dropped rappelling soldiers onto the Grand Bay’s rooftop. There... 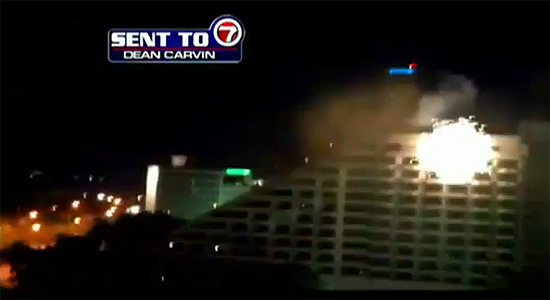 A joint drill between military and police in South Florida involving troops storming a building in the middle of the night was characterized by local media coverage not as a frightening example of how Americans are being acclimatized to accept a state of martial law but as a ‘cool tourist story’.
by Geoffrey Grider May 10, 2012
NOW THE END BEGINS SHARE:

From the Miami Herald: There was the thunderous whump whump of low-flying helicopters, and even the jarring blast of explosions at the abandoned Grand Bay Hotel in Coconut Grove early Tuesday during a military training exercise that jolted many unsuspecting residents from their beds.

A joint drill between military and police in South Florida involving troops storming a building in the middle of the night was characterized by local media coverage not as a frightening example of how Americans are being acclimatized to accept a state of martial law but as a ‘cool tourist story’.

“It was quite a shocking experience,” said Jane Muir, who was awakened around 1:45 a.m. by the sound of military choppers that later dropped rappelling soldiers onto the Grand Bay’s rooftop. “It was kind of that bizarre feeling that you were surrounded by wind.”

From her third-floor balcony, Muir then watched the soldiers fire off flares and smoke bombs before searching floor by floor through the darkened hotel, their paths marked by flashlights and the pop-pop-pop of gunshots. “The show of force was so overwhelming,” she said.

The maneuvers were part of a “realistic urban training” exercise for about 100 military personnel, and organized by the U.S. Special Operations Command, said Maj. Michael Burns, a U.S. Army spokesman. The exercise also included three military helicopters, and the use of simulated explosions and gunfire to mimic real-life military scenarios.

“They have to train in a realistic environment,” Burns said. “We didn’t use any real bullets,” he added reassuringly.

Miami police assisted in overseeing the exercises — but they were instructed to keep quiet about the exercises until late Monday, for security reasons. The police also blocked off roads around the Grand Bay during the exercise, Muir said.

“It was the federal government’s call on what was being done. We were courteously advised,” said Miami commissioner Marc Sarnoff, whose district includes Coconut Grove.

Miami Police Maj. Delrish Moss said that a news release about the training was sent out around 5 p.m. Monday, but it went largely unnoticed. The explosions, however, did not. A handful of alarmed Grove residents called the police and City Hall to ask about the armed choppers flying over their homes. source – Miami Herald