Obama Has Emergency Meeting With Muslim Prince After Boston Bombing 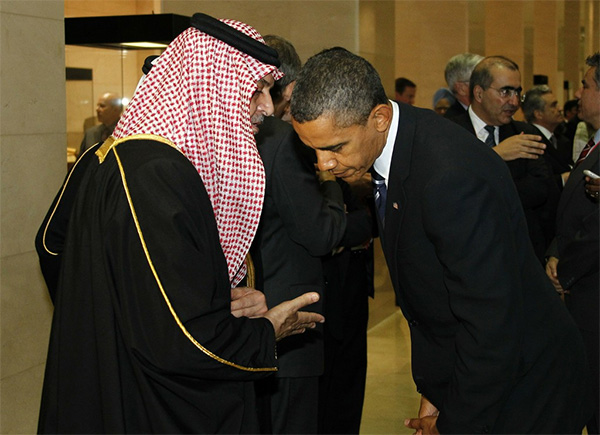 The Saudi “person of interest” suspected of being involved in the Boston Marathon bombings is being deported from the United States next week on “national security grounds,” according to a terrorism expert, who notes that the move is “very unusual,” especially given an unscheduled meeting yesterday between President Obama and Saudi Foreign Minister Prince Saud al-Faisal.

It’s obvious that Obama bows to Prince Saud…but does he also takes orders from him as well?

The attempt to cover up a possible Saudi connection to the Boston attack could explain why authorities are scrambling to get their official narrative straight after photos emerged yesterday on the Internet showing numerous suspects carrying large backpacks, some of them middle eastern in appearance and two of the individuals having been almost certainly identified as employees of private military/security firm Craft International.

The FBI had set a press conference for 5pm EST yesterday afternoon but the event was cancelled hours after the photos were seen by millions of people online. The federal agency blamed the media for erroneous reporting, stating, “these stories often have unintended consequences.”

CNN also had to backtrack after they announced that a suspect had been arrested, a report that was subsequently denied by authorities. Reports of a “dark skinned man” being arrested were later mothballed.

According to terrorism expert Steve Emerson, 20-year-old Abdul Rahman Ali Alharbi, the Saudi national first suspected of being involved in Monday’s twin bomb attack, is being hastily deported. Alharbi was put under armed guard in hospital after the bombing, was visited by Saudi diplomat Azzam bin Abdel Karim, and later had his apartment raided by federal and state law enforcement agents.

“I just learned from my own sources that he is now going to be deported on national security grounds next Tuesday, which is very unusual,” Emerson told Fox News last night.

The news follows an unscheduled meeting between President Obama and Saudi Foreign Minister Prince Saud al-Faisal at the White House yesterday afternoon. “The meeting was not on Obama’s public schedule,” reports Reuters.

“That’s very interesting because this is the way things are done with Saudi Arabia. You don’t arrest their citizens. You deport them, because they don’t want them to be embarrassed and that’s the way we appease them,” Emerson told host Sean Hannity.

A scheduled 10 a.m. photo op between John Kerry and the Saudi Foreign Minister was also abruptly cancelled on Tuesday morning because Kerry was tired from his busy schedule, an explanation that journalists refused to swallow, with the Associated Press’ Matt Lee telling spokesman Patrick Ventrell, “I find it hard to believe that you expect us to believe that that’s the real reason for this.”

The Alharbi clan has long been active in al-Qaida. Khaled bin Ouda bin Mohammed al-Harbi, for example, is a Saudi national who joined Osama bin Laden’s mujahadeen group in the 1980s. He reportedly became an al-Qaida member in the mid-1990s. He turned himself in to Saudi authorities in 2004 as part of an amnesty deal.

The BBC reported Khaled Alharbi was married to the daughter of al-Qaida’s number two, Ayman al-Zawahri. He reportedly appeared with bin Laden in a video praising the Sept. 11, 2001, attacks.

Another top al-Qaida operative is Adel Radi Saqr al-Wahabi al-Harbi, a Saudi national identified by the State Department as “a key member of an al-Qaida network operating in Iran.”

Given the fact that the Obama administration has sent more than half a billion dollars and the CIA is shipping weapons to FSA rebels in Syria who pledged allegiance to and are led by Al-Qaeda militants, the notion that one of these militants would carry out an attack on U.S. soil would be extremely damaging to the White House.

Radio host Michael Savage floated the theory yesterday that the Boston police were told to cancel the press conference by the Obama administration and the FBI, because the Saudi Foreign Minister demanded that the suspect be allowed to leave the country. source – Info Wars