Barack Obama, US president, offered more support for protesters against the global financial system after a weekend of demonstrations in cities around the world, but called on them not... 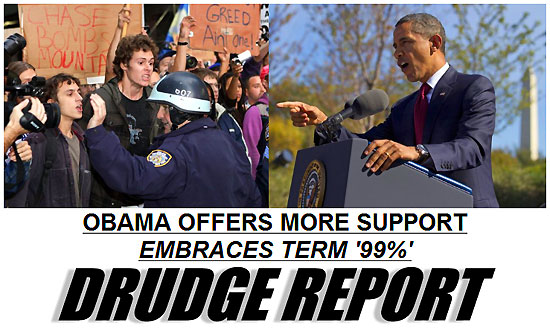 What's that they say about 'birds of a feather'? I believe its 'flock together'.
by Geoffrey Grider October 16, 2011
NOW THE END BEGINS SHARE:

Barack Obama, US president, offered more support for protesters against the global financial system after a weekend of demonstrations in cities around the world, but called on them not to “demonise” those who worked on Wall Street.

What's that they say about 'birds of a feather'? I believe its 'flock together'.

On Sunday, Mr Obama honoured Martin Luther King at a dedication to a new memorial on National Mall in Washington. Referring to protests that have spread from Wall Street to London, Rome and elsewhere, Mr Obama said: “Dr King would want us to challenge the excesses of Wall Street without demonising those who work there.” Mr Obama had previously said the protests “express the frustration” of ordinary Americans with the financial sector.

It is unclear what the next step for protesters will be. In New York, where the month-long Occupy Wall Street movement has been a leading inspiration for protesters, dozens remained at their base in Zuccotti Park on Sunday. The group’s agenda listed only a committee meeting and the regular nightly assembly scheduled for the evening.

In London, hundreds of protesters occupying the steps of St Paul’s cathedral have begun to settle in, erecting tents and setting up a kitchen, a media centre and toilets. “We will occupy this space for as long as it takes for our voices to be heard,” said Adam Young, a student who was also at the Wall Street occupation. “The system is broken and it is up to us to fix it,” he said.

Others stressed they were part of a global movement for justice. “First came the Arab Spring and Spain’s indignados. Then came the Wall Street protests. In London, we are now part of this movement campaigning for a better world,” said Spyro Van Leemnen. source – FT