National DNA Checkpoints Under Fire In 2014

A tactic used by the federal government to gather information for anti-drunken and drugged driving programs is coming under criticism in cities around the country, and some local police... 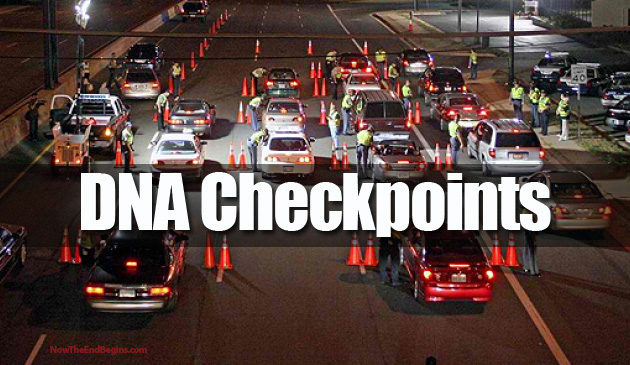 CLICK IMAGE TO SEE WHAT ELSE OBAMA IS WORKING ON IN 2014
by Geoffrey Grider January 7, 2014
NOW THE END BEGINS SHARE:

A tactic used by the federal government to gather information for anti-drunken and drugged driving programs is coming under criticism in cities around the country, and some local police agencies say they will no longer take part.

The tactic involves a subcontractor for the National Highway Traffic Safety Administration that uses off-duty but uniformed police at voluntary roadside checkpoints where motorists are asked on their behavior behind the wheel. In some cases, workers at the checkpoints collect blood and saliva samples, in addition to breath samples. NHTSA has said previously that the surveys do not collect any DNA. Drivers are not charged at the checkpoints.

In an era of rampant distrust of the federal government and in the wake of the Obama administration’s National Security Agency surveillance scandal in which the agency has collected telephone calling records from millions of unsuspecting Americans, the checkpoints have come under intense criticism in several cities this year.

“Five years ago it would have been a different story,” says St. Charles County, Mo., Sheriff Tom Neer, who recently authorized deputies to participate in a checkpoint in his St. Louis suburb and saw a public backlash. “There’re just such strong anti-government feelings among people. Under the circumstances, I would not allow them to do it again. It’s just because of the perception.”

The NHTSA has conducted the surveys for more than 40 years, in cities across the USA and usually at roughly 10-year intervals. In many cases, off-duty, uniformed police officers randomly wave motorists over; they are then asked by workers for subcontractor Pacific Institute for Research and Evaluation if they will participate in the voluntary survey. Drivers who decline are allowed to leave.

However, the mere presence of uniformed officers gives the checkpoints an aura of authority, says Mary Catherine Roper, a senior staff attorney with the American Civil Liberties Union of Pennsylvania. She is studying the issue there after motorists complained about a survey checkpoint last month in Reading.

“We have a whole bunch of rules about when police can pull you over,” she says. “It looks like an exercise of official authority when a cop pulls you over. People assume it’s mandatory, and of course you’re going to stop. That’s a constitutional problem right there.

“Normally, police cannot pull you over unless they have a good reason for thinking you’ve done something wrong,” Roper says. “There’s no exemption to the Constitution for conducting a survey. They’re pulling people off the road.”

She suggests “there are lots of other places you can talk to drivers. You could hand out notes at a toll booth asking them to participate. You could do them at highway rest stops. There are a lot of ways to do this that do not involve … the government forcing you off the road.”

This year’s round of surveys is only the second time that data have been obtained on drug use by drivers.

In an e-mailed statement, NHTSA defended the surveys: “Each year, close to 10,000 people die in drunk driving crashes: 27 people a day, or one person every 53 minutes, according to data (from NHTSA),” the statement says.

“To better understand the issue, the agency has regularly conducted its National Roadside Survey of Alcohol and Drugged Driving in communities across the country for over 40 years,” according to the statement. “The survey provides useful data about alcohol and drug use by drivers, and participation is completely voluntary and anonymous. More than 60 communities across the country will participate this year, many of which participated in the previous survey in 2007. NHTSA always works closely with state and local safety officials and local law enforcement to conduct these surveys as we work to better inform our efforts to reduce drunk and drugged driving.”

Drivers have reportedly been offered $10 for cheek swabs and $50 for blood.

The checkpoints spurred complaints in November from drivers in the Fort Worth area. Fort Worth Police Chief Jeffrey Halstead apologized for his officers’ participation on the department’s Facebook page. He added: “Any future Federal survey of this nature, which jeopardizes the public’s trust, will not be approved for the use of Fort Worth police.”

And in June, Alabama Gov. Robert Bentley, a Republican, said the stops were “bad timing” after drivers complained about checkpoints in St. Clair County and Bibb County, both near Birmingham. State officials investigated and found that motorists didn’t report “undue pressure” to participate, but suggested to Bentley that state police refrain from helping with future studies.

Neer said six of his off-duty, uniformed officers were “duped” into moonlighting at the checkpoints. “Our department coordinator got information from the subcontractor, and came to me,” Neer says. “I approve all overtime compliance with private entities. They wanted to know if we’d provide a couple of deputies just for security.”

At the Dec. 6 and 7 checkpoints, uniformed deputies in marked cruisers flagged down motorists and showed them to a marked area alongside the road where a NHTSA subcontractor asked if they wanted to participate in the survey. Those who declined were allowed to leave, Neer says.

He says he had not expected the deputies to actively participate, but only to provide security. Pacific Research could not be reached for comment. source – USA Today