The American ambassador to Libya and three other embassy staff were killed in a rocket attack after an armed mob protesting at a 'blasphemous' film about the Prophet Mohammed... 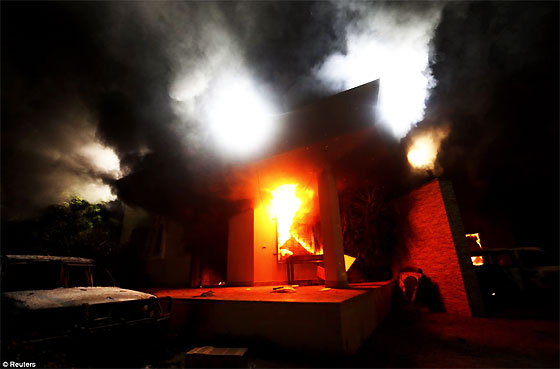 Destruction: Plumes of smoke and flames can be seen rising out of the U.S. Consulate in Benghazi after the building was raided by gunmen who set it on fire
by Geoffrey Grider September 12, 2012
NOW THE END BEGINS SHARE:

The American ambassador to Libya and three other embassy staff were killed in a rocket attack after an armed mob protesting at a ‘blasphemous’ film about the Prophet Mohammed set fire to the consulate in Benghazi. 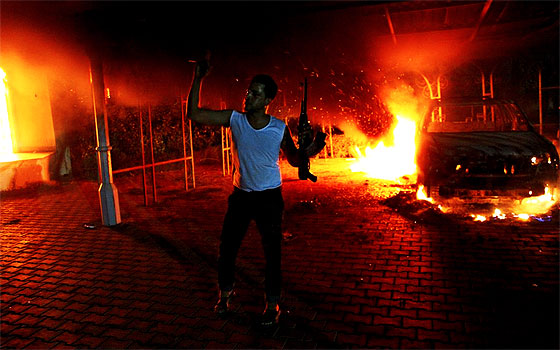 Revolt: An armed man waves his rifle as buildings and cars are engulfed in flames after being set on fire inside the U.S. consulate compound in Benghazi, Libya

Christopher Stevens, 52, was at the compound evacuating staff when the building was attacked by militants who shot dead Sean Smith, a foreign service information management officer.

In the subsequent chaos, the diplomat and his team made a desperate bid to flee by car to safety. But the vehicle came under heavy arms fire and was hit by a rocket, leaving it disabled and at the mercy of the mob.

Two marines attempted to aid Ambassador Stevens but were shot dead, according to CBS

Destruction: Plumes of smoke and flames can be seen rising out of the U.S. Consulate in Benghazi after the building was raided by gunmen who set it on fire

Ambassador Stevens was a career diplomat who spoke Arabic and French and had already served two tours in Libya, including running the office in Benghazi during the revolt against Gaddafi. Five other US ambassadors have been killed in the line of duty, the last being Adolph Dubs in Afghanistan in 1979.

President Barack Obama today condemned the attack and paid tribute to the late Ambassador Stevens as he ordered increased security at diplomatic posts around the world. 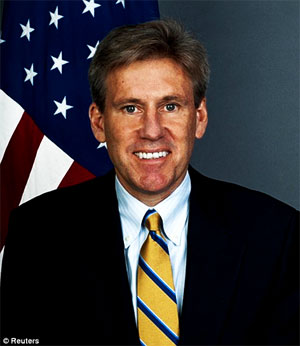 Killed: Christopher Stevens was a career diplomat who died as he tried to evacuate staff from the US consulate in Benghazi

‘Chris was a courageous and exemplary representative of the United States,’ he said.

‘Throughout the Libya revolution, he selflessly served our country and the Libyan people at our mission in Benghazi.

‘As Ambassador in Tripoli, he has supported Libya’s transition to democracy. His legacy will endure wherever human beings reach for liberty and justice. I am profoundly grateful for his service to my Administration, and deeply saddened by this loss.’

It is understood that two US security personnel and a fourth man, also a US citizen, died in the attack.

The deaths will put huge pressure on the Libyan administration which took over after the fall of Muammar Gaddafi. Despite the West taking a key role in his overthrow, the country remains unstable and Islamic militants have moved into the power vacuum.

There are also huge questions about the security surrounding both Ambassador Stevens and the US diplomatic buildings in such a volatile country.

The violence in Libya – and an earlier assault by 2,000 people on the US embassy in the Egyptian capital Cairo – were sparked by a 14-minute trailer for a film called The Innocence of Muslims posted on YouTube.

In an original English version and another dubbed into Egyptian Arabic, Mohammed is depicted as a fraud, a womaniser and a madman, showing him having sex and calling for massacres.

It was made by Sam Bacile, a 56-year-old California real estate developer who identifies himself as an Israeli Jew. He said he had produced, directed and written the two-hour film which had only been shown once to a mostly empty theater in Hollywood earlier this year.

‘Islam is a cancer, period,’ he said in an interview yesterday, speaking after the State Department confirmed the death of an American in Benghazi.

He was apologetic about the killing but blamed lax embassy security and the perpetrators of the violence. ‘I feel the security system (at the embassies) is no good,’ said Bacile. ‘America should do something to change it.’

Mr Bacile claimed he did not know who had dubbed the film into Arabic. He went into hiding after the full scale of the the trouble in North Africa became clear.

Yesterday, Morris Sadek, an Egyptian-born Christian in the U.S. known for his anti-Islam views, told The Associated Press from Washington that he was promoting the video on his website and on certain TV stations, which he did not identify.

The film has featured on Egyptian media reports for several days with ultraconservative clerics going on air to denounce it and also to attack Sadek, who they blamed for the film.

Matters came to a head yesterday when hundreds of mainly ultraconservative Islamist protesters in Egypt marched to the US Embassy in downtown Cairo, gathering outside its walls and chanting against the movie and the US.

Most of the embassy staff had left the compound earlier because of warnings of the upcoming demonstration.

The crowd chanted, ‘Islamic, Islamic. The right of our prophet will not die.’ Some shouted, ‘We are all Osama,’ referring to al-Qaida leader bin Laden.

Young men, some in masks, sprayed graffiti on the walls. Some grumbled that Islamist President Mohammed Morsi had not spoken out about the movie.

A group of women in black veils and robes that left only their eyes exposed chanted, ‘Worshippers of the Cross, leave the Prophet Mohammed alone.’

Dozens of protesters then scaled the embassy walls, and several went into the courtyard and took down the American flag from a pole. They brought it back to the crowd outside, which tried to burn it, but failing that tore it apart.

The protesters on the wall then raised on the flagpole a black flag with a Muslim declaration of faith, ‘There is no god but God and Mohammed is his prophet.’  The flag is commonly used by ultraconservatives around the region.

The Cairo embassy is in a diplomatic area in Garden City, where the British and Italian embassies are located, only a few blocks away from Tahrir Square, the center of last year’s uprising that led to the ouster of Mubarak.

The U.S. Embassy is built like a fortress, with a wall several metres high. But security has been scaled back in recent months, with several roadblocks leading to the facility removed after legal court cases by residents.

Trouble quickly spread to Libya where a group identifiying itself as the ‘Islamic Law Supporters’ attacked the consulate on the anniversary of the 9/11 attacks on American in protest at a film that they deemed blasphemous to the Prophet Mohammed.

A furious mob fired gunshots and then set the building alight as they clashed with Libyans hired to guard the facility. Outnumbered by the crowd, Libyan security forces did little to stop them, al-Sharef said.

Witnesses reported militants firing rocket-propelled grenades from a nearby farmhouse.

The situation rapidly deteriorated as the army tried to cordon off the area around the building and fought running battles with the attackers. But the crowd overwhelmed the facility, looting the contents.

‘I heard nearly 10 explosions and all kinds of weapons. It was a terrifying day,’ said a witness who refused to give his name because he feared retribution.

Order was eventually restored after three hours but there was very little of the consulate left. Last night, the US confirmed that a state department officer had been killed last night with US Secretary of State Hillary Rodham Clinton strongly condemning the attack.

She said she had called Libyan President Mohammed el-Megarif ‘to coordinate additional support to protect Americans in Libya.’

‘Some have sought to justify this vicious behavior as a response to inflammatory material posted on the Internet,’ Clinton said in a statement released by the State Department.

‘The United States deplores any intentional effort to denigrate the religious beliefs of others. Our commitment to religious tolerance goes back to the very beginning of our nation. But let me be clear: There is never any justification for violent acts of this kind.’

It was some hours later that it emerged Ambassador Stevens and three of his team had been killed.

The attacks were the first such assaults on US diplomatic facilities in either country, at a time when both Libya and Egypt are struggling to overcome the turmoil following the ouster of their longtime leaders, Moammar Gadhafi and Hosni Mubarak, in uprisings last year. source – Daily Mail UK