One day after an attack in Canada, a Muslim man suspected of terror ties attacked two New York City police with a hatchet.... 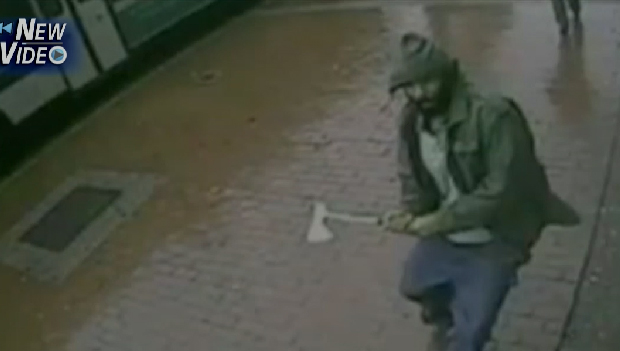 NYC ax-wielding jihadi: “If the Zionists and the Crusaders had never invaded and colonized the Islamic lands after WW1, then there would be no need for Jihad!”

One day after an attack in Canada, a man suspected of terror ties attacked two New York City police with a hatchet. New surveillance video shows the suspect about to launch the hatchet attack in Jamaica, Queens. A freelance photographer had just asked four police officers to pose for a photo when a man pulled a hatchet from his bag, hitting one officer in the arm and another in the head.

Police then opened fire, killing the man and wounding a woman nearby with errant gunfire. The NYPD has not released the suspect’s name because his family has not yet been notified. Fox News has learned that the FBI Joint Terrorism Task Force is on the scene. Police also tell Fox News that the suspect’s Facebook page has concerning content.

The NYPD has issued a patrol bulletin alerting cops to be in a state of heightened awareness. There are also reports that police are conducting a large-scale operation near the site of the attack.

Buck Sexton weighed in tonight. “Tonight, we are a city on the edge here,” he said.

He also said, “Which is better, to sit around and do nothing, or to Jihad fisabeelallah!” Jihad fisabeelallah is jihad for the sake of Allah, violent jihad. And Zale Thompson didn’t sit around and do nothing, he took his ax and went jihad on four police officers. – See more at: http://pamelageller.com/2014/10/nyc-ax-wielding-jihadi-if-the-zionists-and-the-crusaders-had-never-invaded-and-colonized-the-islamic-lands-after-ww1-then-there-would-be-no-need-for-jihad.html/#sthash.U6Fx1fkO.dpuf