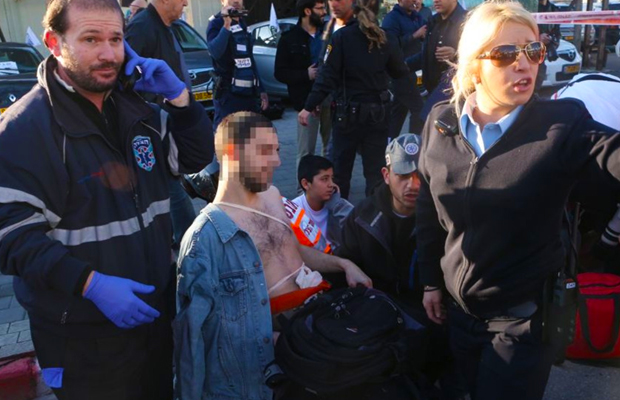 Police spokesman Micky Rosenfeld said police believe it was a “terror attack.” Four of the victims were hospitalized in serious condition, another five were left in a moderate condition, and the remaining were lightly injured according to media reports.

Medics and police evacuate an Israeli man who was injured in a stabbing attack on the No. 40 Dan bus in Tel Aviv on January 21, 2015. (photo credit: Flash90)

The attacker was identified as a Palestinian from the West Bank city of Tulkarem, 23. He was shot after a short chase and taken into police custody. The attack occurred at about 7:30 a.m. on a No. 40 bus heading north through the city from Bat Yam.

The attacker first stabbed the bus driver, Herzl Biton, who attempted to fight back, before attacking others as passengers attempted to escape the scene.

Officers from a prison service who happened to be nearby and saw the bus swerving out of control and a man running away, gave chase, shot the man in the leg, wounding him lightly and subsequently arrested him.

The incident happened at the Maariv Bridge, which spans a main artery in the city and was packed with rush hour traffic at the time.

Read the rest of the story on Times Of Israel…