First Lady Michelle Obama’s trip to South Africa and Botswana last week cost taxpayers well over half a million dollars, possibly in the range of $700,000 or $800,000, according... 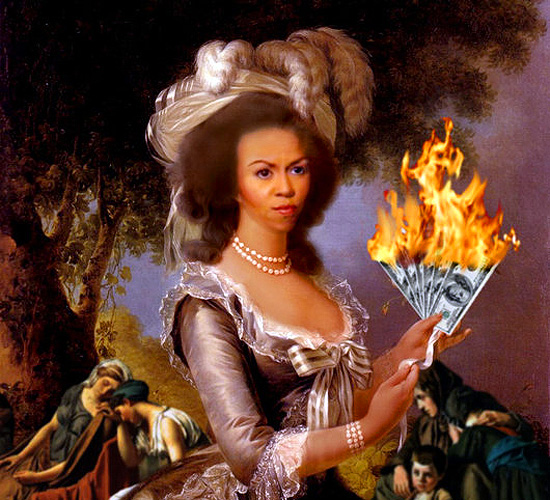 She spends like the American Queen, not First Lady

First Lady Michelle Obama’s trip to South Africa and Botswana last week cost taxpayers well over half a million dollars, possibly in the range of $700,000 or $800,000, according to an analysis by White House Dossier.

Many of the trip’s expenses cannot be obtained with specificity, including the cost of local transportation for the first lady, Secret Service protection, the care and feeding of staffers, and pre-trip advance work done by administration officials in South Africa.

But it is possible to estimate some of these costs and put a price tag on one of the major expenses – her transportation to and from southern Africa and her trips between cities there.

While the goals of her journey – “youth leadership, education, health and wellness” in southern Africa, according to the White House – are laudable, many may question whether such an expensive outreach overseas by the president’s wife is worthwhile given the threat of the ballooning federal debt to the economy.

This is particularly true given that the trip, while featuring many official events, also included tourist components such as visits to historical landmarks and museums, a nonworking chance to meet Nelson Mandela that Mrs. Obama described as “surreal,” and a safari. Mrs. Obama also brought along her mother, her daughters and two of their cousins – the children of her brother Craig Robinson.

In a conversation last week with a South African online newspaper, U.S. Embassy Spokeswoman Elizabeth Trudeau made clear that the trip was partially a personal pilgrimage for the first lady.

“She’s coming on this trip to talk about women’s development and youth development, and South Africa is a leader in that, not only on the continent but globally,” said Trudeau. “A visit to South Africa is important for them as a family. She’ll be visiting many Struggle-era landmarks, including the Apartheid Museum (and) the Hector Pieterson Memorial.”

Based on the plane’s tail number and a description of it in a press pool report, it’s clear Mrs. Obama flew over and back on a C-32, a specially configured military version of the Boeing 757 that also ferries the vice president on occasion and is sometimes known as “Air Force Two.”

According to publicly available Defense Department figures, DOD charges other federal agencies $12,723 an hour to cover expenses for the use of a C-32. Based on the distance traveled and the flight speed of the plane, this adds up to about $430,000 for use of the aircraft alone.

Perhaps the best estimate of the other costs involved in such a trip comes not from official sources but from a reporter, Dana Milbank of the Washington Post. In a 2002 article, he wrote that his reporting had found that a single presidential fundraising trip within the United States by then-President George W. Bush could cost close to $100,000 for items like staff, Secret Service and advance work. source – White House Dossier