But the most remarkable caught-on-camera smooch undoubtedly took place between Miley and her fellow pop princess Katy Perry, who appeared totally stunned when Miley leaned into the front row... 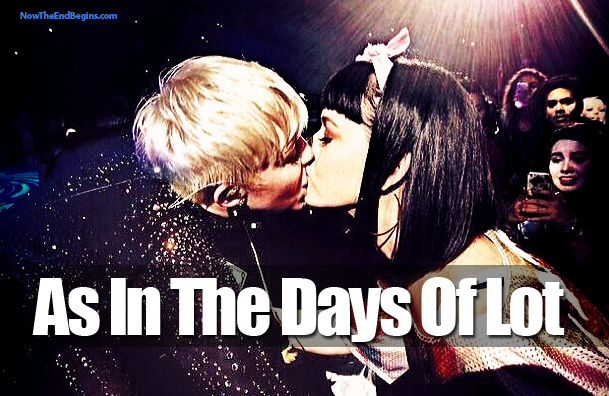 “Likewise also as it was in the days of Lot; they did eat, they drank, they bought, they sold, they planted, they builded; But the same day that Lot went out of Sodom it rained fire and brimstone from heaven, and destroyed them all.” Luke 17:28,29

The bible says that in the last days, homosexuality and all manner of perversion would be on open display as it was in the days of Lot where God destroyed Sodom and Gomorrah for their vile wickedness. Miley Cyrus and company are working overtime to teach your children that any love is good love, that any pleasure no matter how wicked should be indulged in, and that there is no right and wrong, only preference and personal opinion. And this doctrine of demons is rapidly spreading throughout all of Hollywood’s forms of media be they in motion picture, television, radio or internet.

We submit to you that those days, the days of Lot, have begun.

Yahoo News: The Los Angeles stop for Miley Cyrus’s “Bangerz” tour was bound to be eventful no matter what. It did, after all, commence with Miley making a grand entrance via a slide shaped like her giant tongue, and concluded with her getting frisky with an Abe Lincoln lookalike during “Party in the USA.” But thanks to a couple very special guests, Miley’s concert at L.A.’s Staples Center took the USA-partying to a whole new Hollywood level.

One of the highlights of Miley’s Saturday concert was her performance of the loved-up ballad “Adore,” during which she encouraged fans to make out for the jumbotron’s kiss-cam (“with lots of tongue — as you can imagine, tongue is appreciated on this tour”). But the most remarkable caught-on-camera smooch undoubtedly took place between Miley and her fellow pop princess Katy Perry, who appeared totally stunned when Miley leaned into the front row for a big kiss. source – Yahoo News