“We’re happy to launch our Pride Collection, partnering with six individuals connected to the LGBTQ+ community who show the power of expressing one’s true self,” the Converse apparel company tweeted on Monday. Desmond is highlighted on the Converse website wearing a flamboyant outfit and make-up, striking a dramatic dance pose alongside a quote stating, “There is no normal.” A brief bio describes him as a “drag kid / lgbtq+ advocate.”

Converse has announced the release of a new line of shoes celebrating LGBT culture alongside a marketing featuring characters of various sexual orientations, including an 11-year-old ‘drag kid’ who goes by the stage name ‘Desmond Is Amazing.’

Ahh, all those happy childhood memories of lacing up your hi-top Chuck Taylor’s from Converse. I had them in both black and white, and loved those shoes. When people think Converse the majority of the time it is those Chuck Taylor shoes they are remembering. Now shoe maker Converse wants you to have new memories and new associations with your beloved sneakers. They just launched their 2019 Converse Pride Collection, featuring bisexual party girl Miley Cyrus, and an 11-year old drag queen named Desmond Napoles who uses the stage name of ‘Desmond Is Amazing‘ when he performs in LGBTQP strip clubs for gay men. Welcome to Converse 2019.

If after reading the opening paragraph, (and hopefully still reading), you don’t think we are living in the biblical last days you haven’t opened your bible is quite a while then. Ever read ‘Pilgrim’s Progress’ and see what Pilgrim saw in Vanity Fair? Lol, that’s nothing compared to what life is like in our day. Converse using preteen transexuals to sell sneakers, bragging about it and then being applauded by an unsaved world is where we are right now.

The bible has become hate speech, and the Church Age is coming to an end. Use whatever time remains to tell this lost world about Jesus Christ before that window closes completely. I’m hearing the final boarding call for Flight #777 on Titus213 Airlines. Christian, are you in or out?

FROM NEWSWARS: “We’re happy to launch our Pride Collection, partnering with six individuals connected to the LGBTQ+ community who show the power of expressing one’s true self,” the apparel company tweeted on Monday.

Desmond is highlighted on the Converse website wearing a flamboyant outfit and make-up, striking a dramatic dance pose alongside a quote stating, “There is no normal.” A brief bio describes him as a “drag kid / lgbtq+ advocate.” 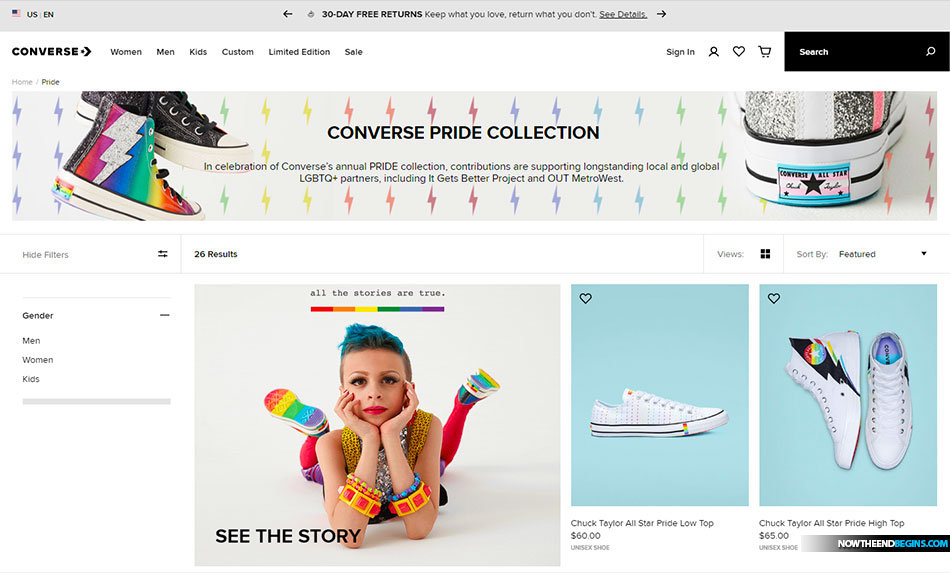 Desmond Napoles has autism, according to his parents, who say that his ‘drag performances’ help him to cope with his disability.

We’re happy to launch our Pride Collection, partnering with six individuals connected to the LGBTQ+ community who show the power of expressing one’s true self. Contributions are supporting @ItGetsBetter @OutMetroWest & @FenwayHealth. https://t.co/N7VTHLhf98 pic.twitter.com/ip2GGhtCE9

He began to garner attention in 2015 after dancing in the NYC Pride Parade, and amid rising popularity on social media, Napoles was invited to appear on Good Morning America, where he danced for the audience and was paid a visit from three adult drag queens.

Some have offered speculation based on evidence and comments made by Desmond’s parents that they may even use proceeds he generates to help support the family. READ MORE