Michelle Obama Complains That Million-Dollar Vacation Lifestyle Is Like ‘Prison’

First Lady Michelle Obama on Tuesday described living in the White House as like being in a “really nice prison.” ... 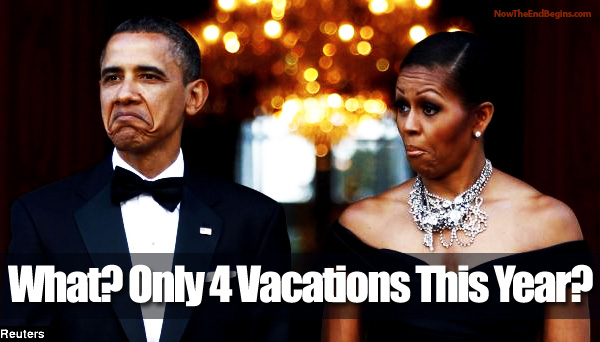 Treating America as their own personal ATM

The unabashed luxuriousness of the Obamas’ lifestyle reflects a genuine tone-deafness with regard to the pressing concerns of millions of Americans, as well as the president’s priorities. Even as he blamed sequestration for the decision to cancel White House tours that would have cost a total of $2 million for the rest of the year, it was revealed that the known cost of Obama’s Christmas vacation in Hawaii last year was at least $4 million.

That vacation was also the fourth one taken in Hawaii in four years, three of which involved separate flights First Lady Michelle Obama took to get there ahead of her husband. This year’s separate flight, necessitated by the president’s trip back to Washington to complete the fiscal cliff deal before returning to Honolulu, cost taxpayers an additional $3.24, and ran the total tab for the 2012-13 trip to more than $7 million.

The total for the four trips combined? More than $20 million.

However, holiday vacations to Hawaii hardly scratch the surface. These vacations were also interspersed with trips to locales like Florida or Southern California. In addition, the president’s “mini-vacations” have raised eyebrows. His three-day golf outing at an exclusive club in Florida, where he was joined by Tiger Woods, occurred less than two weeks before the sequester kicked in — even as the White House Blog raised the specter of “harmful automatic cuts” that are “threatening hundreds of thousands of jobs, and cutting vital services for children, seniors, people with mental illness and our men and women in uniform.”

Senator Jeff Sessions (R-AL) put that trip in perspective, noting that it cost American taxpayers “over a million dollars,” which was “enough money to save 341 federal workers from furlough.” The rest of the family was on vacation in Colorado at the time, meaning taxpayers are billed for yet another separate use of Air Force One, which costs approximately $180,000 an hour to use. This marks the fourth Colorado ski vacation in four years for the First Lady and and her daughters, Malia and Sasha. Judicial Watch confirmed that the cost of 2012 trip, including U.S. Secret Service costs, as well as accommodations at the Fasching Haus deluxe condominium and the Inn at Aspen, totaled $48,950.38. source – Front Page

From Washington Examiner: First Lady Michelle Obama on Tuesday described living in the White House as like being in a “really nice prison.” Obama’s comment came during her discussion with former First Lady Laura Bush at the African First Ladies Summit in Tanzania during an interview moderated by journalist Cokie Roberts.

Roberts noted that Martha Washington, the first First Lady, also described living in the role as akin to being a state prisoner.

Obama said she loved her job and found it liberating in some respects, but confining in others.

“There are some prison elements to it,” she joked. “But it’s a really nice prison.”

“You can’t complain,” Michelle Obama admitted. “But there is definitely elements that are confining.” source – Washington Examiner