Same-sex couples in Maryland were greeted with cheers and noisemakers held over from New Year's Eve parties, as gay marriage became legal in the first state south of the... 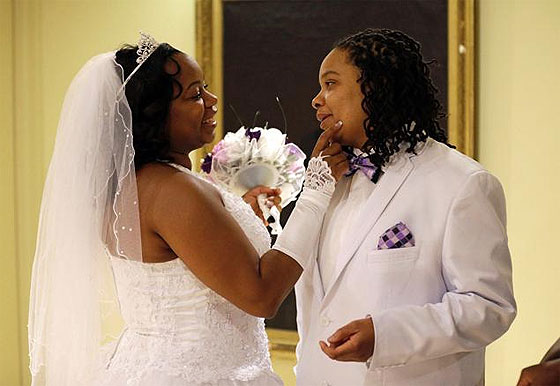 “And likewise also the men, leaving the natural use of the woman, burned in their lust one toward another; men with men working that which is unseemly, and receiving in themselves that recompence of their error which was meet.” Romans 1:27

BALTIMORE — Same-sex couples in Maryland were greeted with cheers and noisemakers held over from New Year’s Eve parties, as gay marriage became legal in the first state south of the Mason-Dixon Line on New Year’s Day.

Darcia Anthony, left, and her partner, Danielle Williams, chat before participating in a marriage ceremony at City Hall in Baltimore, Tuesday, Jan. 1, 2013.

Six other same-sex couples also were being married at City Hall. Ceremonies were taking place in other parts of the state as well. The ceremonies follow a legislative fight that pitted Gov. Martin O’Malley against leaders of his Catholic faith. Voters in the state, founded by Catholics in the 17th century, sealed the change by approving a November ballot question.

“There is no human institution more sacred than that of the one that you are about to form,” Rawlings-Blake said during the brief ceremony. “True marriage, true marriage, is the dearest of all earthly relationships.”

Brigitte Ronnett, who also was married, said she hopes one day to see full federal recognition of same-sex marriage. Maryland, Maine and Washington state were the first states to approve same-sex marriage by popular vote, in November, a development Ronnett said was significant.

I think it’s a great sign when you see that popular opinion is now in favor of this,” said Ronnett, 51, who married Lisa Walther, 51, at City Hall. source – NY Daily News