"I definitely think we should all have the right to love, and love publicly, the people that we want to love.”... 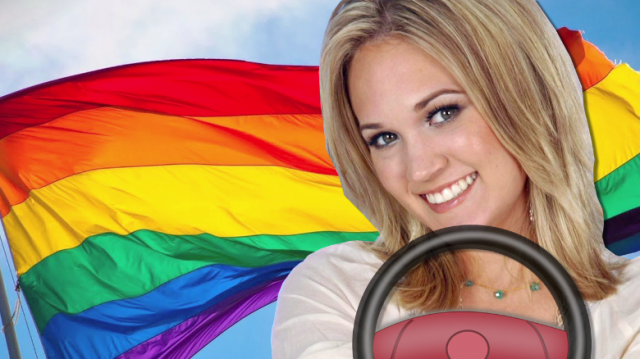 We live in the age where the professing Christian church is smack dab in Laodicea. Laodicea, for those of you who read your bibles, is the last church on earth right before Jesus returns in the Rapture. It is a cold, dead church that is “rich and increased with goods”, and they have locked Jesus out on the outside. Carrie Underwood joins the ever-swelling chorus of weak, materialistic “christians” who would rather shipwreck their faith rather than lose business deals because of maintaining a biblical perspective on life.

Make no bones about it, the bible is 100% against homosexuality in all its many forms.

The Blaze: Singer Carrie Underwood is making headlines after coming out in support of same-sex marriage. The country and pop singer, who was raised a Baptist, announced her support for gay nuptials during an interview with Britain’s The Independent. Underwood told the publication that she believes everyone deserves to love whomever he or she chooses, citing her faith as the basis for her reasoning.

“As a married person myself, I don’t know what it’s like to be told I can’t marry somebody I love, and want to marry,” the singer told the outlet. “I can’t imagine how that must feel. I definitely think we should all have the right to love, and love publicly, the people that we want to love.”

Underwood also told the publication that she and her husband, pro-hocker player Mike Fisher, attend a “gay-friendly” non-denominational church. The songstress went on to say that God wants Christians to love others

“It’s not about setting rules, or [saying], ‘Everyone has to be like me.’ No. We’re all different. That’s what makes us special. We have to love each other and get on with each other. It’s not up to me to judge anybody,” she added.

Already, Underwood has received the praise of the Gay & Lesbian Alliance Against Defamation (GLAAD), a gay rights group. In a release addressing the singer’s comments, the organization applauded her, writing, “GLAAD commends Carrie Underwood for supporting marriage equality and rooting it in her faith.”

“You know, Carrie Underwood isn’t any different from anyone else in America. The more Americans think about how issues affect their gay friends and family the more they come to realize that supporting same-sex civil marriage is the right thing to do,” LaSalvia wrote in an email to the L.A. Times. “More and more people are coming to that conclusion — and that includes conservative Christians.” source – Blaze