Thousands of Jordanians have marched through the capital of Amman calling for the immediate execution of six Islamic State prisoners following the horrendous death of captured Jordanian pilot, Muath... 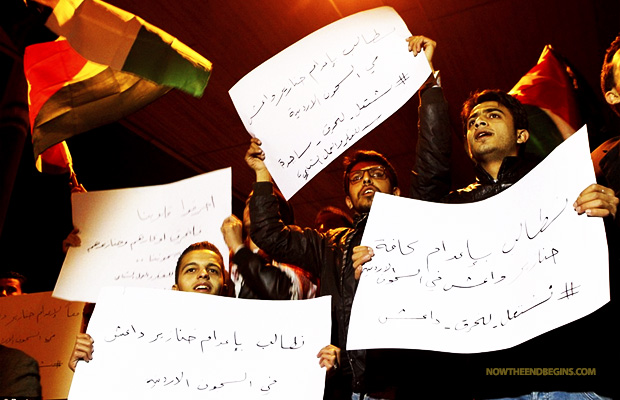 Demonstrators carried signs that read: 'We demand the execution of Islamic State detainees in Jordan' as they marched through Amman
by Geoffrey Grider February 3, 2015
NOW THE END BEGINS SHARE:

Thousands of Jordanians have marched through the capital of Amman calling for the immediate execution of six Islamic State prisoners following the horrendous death of captured Jordanian pilot, Muath al-Kasasbeh.

Demonstrators carried signs that read: ‘We demand the execution of Islamic State detainees in Jordan’ as they marched through Amman

Gunfire and rioting has also reportedly been witnessed in the Jordanian town of Karak, the hometown of Mr Kasasbeh. Roads have been blocked with makeshift barricades and thick smoke has been seen after locals started to burn tyres. At least one government building has been torched.

Disgusted protesters took to the streets just hours after the release of a sickening 22-minute-long ISIS video that shows Mr al-Kasabeh being burned alive while he was locked helpless in a cage.

The release of the expertly-edited video – which represents a new level of barbarity from a group notorious for its savagery – has prompted Jordan to announce it would execute all six prisoners convicted of association with ISIS at dawn today, roughly 6.40am (4.40am GMT).

The chilling footage, entitled ‘Healing the Believers’ Chests’, appears to show the captured airman being set alight as the militants, infamous for their barbaric murders, plunged to new depths of depravity.

Within an hour of the 22-minute-long video’s publication, Jordan reportedly moved six ISIS-linked prisoners to a jail in the south of the country which is usually used for state executions.