One of the nation's largest military bases is reportedly under tighter security after three Middle Eastern men tried to enter without proper authorization. 10News learned the three men --... 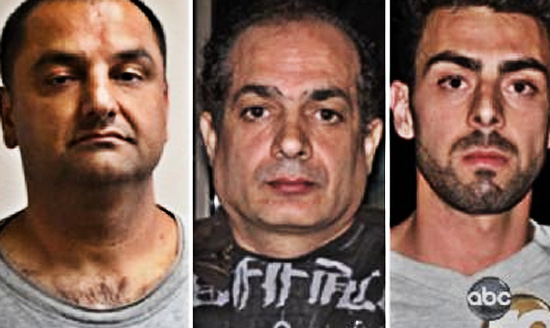 Does anyone remember Ft. Hood?

Hmmm, doesn't look like the Pep Boys to me...

On Wednesday, base officials said there was no threat, but others on the base told 10News security has been stepped up. According to a Be On the Lookout (BOLO) alert issued to high-ranking Camp Pendleton officials, someone reported hearing hateful comments and terrorist threats from three men at a gas station in Oceanside Saturday.

According to the alert, shortly after midnight Sunday, a rented silver Toyota Corolla driven by Naeem attempted to enter Camp Pendleton through the main gate. As it was being searched, Petrossian and Avanosian drove up in a black Mercedes, but were told to wait. Instead, they continued past the gate and onto the base. Following a short pursuit, the Mercedes was stopped and searched.

No weapons or contraband were found in the Mercedes, but base security noticed the air bag in the steering wheel of the Mercedes had been pulled out and re-attached with duct tape and had wires hanging free, the alert said. According to the alert, Naaem told base security he was lost and was trying to go to Glendale. When interviewed, Petrossian and Avanosian said they were lost and trying to go to Glendale. The three men claimed not to know each other, the alert said. Naaem, Petrossian and Avanosian were photographed and released after questioning, and a warning about the trio was posted to law enforcement.” source – 10 News