Israel shows Iran that distance is no object The Yarmouk Complex of military plants near Khartoum, which was bombed five minutes after midnight Wednesday, Oct.  24, by four... 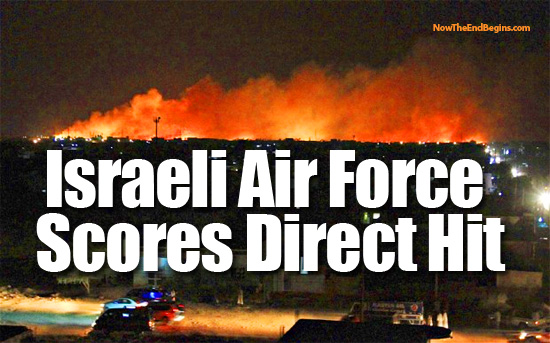 Iran, this was a "strike with a message". Are you paying attention?
by Geoffrey Grider October 26, 2012
NOW THE END BEGINS SHARE:

Israel shows Iran that distance is no object

Iran, this was a “strike with a message”. Are you paying attention?

Western intelligence sources have not revealed what types of Shehab were being turned out in Sudan but they believe the Yarmouk’s output was intended to serve as Tehran’s strategic reserve stock in case Iran’s ballistic arsenal was hit by Israeli bombers.

Videos of the explosions caused in the air raid over Sudan showed large quantities of phosphorus flares in the sky suggesting that a large stockpile was demolished along with the manufacturing equipment.

Western sources did not divulge information about the comings and goings of Iranian missile specialists or whether the Bashir government had given Tehran permission to stage attacks from Sudan against Middle East targets, in return for the allotment of a number of missiles to the Sudanese army. All they would say is that the complex’s structures had been completely leveled by the aerial bombardment and subsequent fire.

Sudan accused Israel of the attack and stated it reserved the right to respond at a time and circumstances of its choosing. Israeli officials declined to comment in answer to questions.

If Indeed Israel was responsible for the bombing raid, it is possible to postulate the following objectives:
1.  Its air force flew 1,800-1,900 kilometers to reach the Sudanese arms factory, a distance longer than the 1,600 kilometers to the Iranian underground enrichment site of Fordo. This operation may have been intended to show Tehran that distance presents no obstacles to an Israeli strike on its nuclear program.
2.  The IAF has an efficient in-flight refueling capability.
3.  The raid would have degraded Iran’s ability to retaliate for a potential Israel or US attack.

If it was conducted by Israel, it would add a third item to the list of backdoor assaults in which Iran and Israel appear to be engaged in the past three months.

On August 17, the power lines to Fordo were sabotaged, interrupting the work of enrichment taking place there and causing some of the advanced centrifuges to catch fire. On Oct. 6, an Iranian stealth drone was launched from Lebanon into Israeli air space and photographed its most sensitive military sites as well as the Dimona nuclear reactor before Israel brought it down. source – DEBKA