Intelligence officials are comparing a newly discovered secret ISIS document to Hitler’s “Mein Kampf,” as it blames Israel for the rise of the Islamic State and crowns U.S. President... 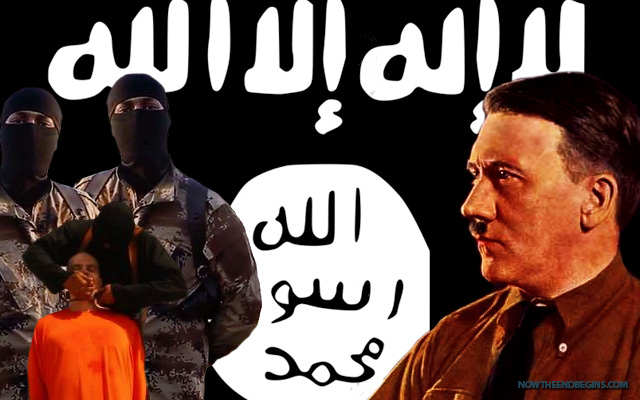 Intelligence officials are comparing a newly discovered secret ISIS document to Hitler’s “Mein Kampf,” as it blames Israel for the rise of the Islamic State and crowns U.S. President Barack Obama as the “Mule of the Jews.”

Found in Pakistan’s remote tribal region by American Media Institute (AMI), the 32-page Urdu language document promotes an “end of the world” battle as a final solution. It argues that the Islamic leader should be recognized as the sole ruler of the world’s 1 billion Muslims, under a religious empire called a “caliphate.”

“It reads like the caliphate’s own Mein Kampf,” said a U.S. intelligence official, who reviewed the document. “While the world is watching videosof beheadings and crucifixions in Iraq and Syria the Islamic State is moving into North Africa the Middle East, and now we see it has a strategy in South Asia. It’s a magician’s trick, watch this hand and you’ll never see what the other is doing.”

Retired U.S. Defense Intelligence Agency Director Gen. Michael Flynn and other U.S. intelligence officials confirmed the authenticity of the document based on its unique markings, specific language used to describe leaders and the writing style and religious wording that matched other Islamic State records.

Attempting to finish the work that Hitler started.

Flynn said the undated document, “A Brief History of the Islamic State Caliphate (ISC), The Caliphate According to the Prophet,” is a campaign plan that “lays out their intent, their goals and objectives, a red flag to which we must pay attention.”

The document serves as a Nazi-like recruiting pitch that attempts to unite dozens of factions of the Pakistani and Afghan Taliban into a single army of terror.  It includes a never-before-seen history of the Islamic State, details chilling future battle plans and urges al-Qaeda to join Islamic State.

Its tone is direct: “Accept the fact that this caliphate will survive and prosper until it takes over the entire world and beheads every last person that rebels against Allah. This is the bitter truth, swallow it.”

The brutal killing of a teacher and three children at the Ozar Hatorah school in Toulouse in 2012 by an Algerian Islamist was a major signal to the Jewish community that Europe was no longer safe and that not enough was being done to curtail the rise of anti-semitism, he said.

“It’s important to remember what our founder, Wiesenthal said, ‘it often starts with the Jews but it never ends with the Jews,” Cooper said. “As a matter fact [Islamic State] did not create anti-semitism but they are taking advantage of it, and they are building on it.”

The document advocates creating a new terrorist army in Afghanistan and Pakistan to trigger a war in India and provoke an Armageddon-like confrontation with the United States. It also details Islamic State’s plot to attack U.S. soldiers as they withdraw from Afghanistan and target America diplomats and Pakistani officials and blames the rise of jihadi organizations on the establishment of Israel.

“No sooner had the British government relinquished control of Israel, Ben-Gurion, the leader of the Jews, declared the independence of the State of Israel, triggering a global migration of Jews to the Jewish State, and launching the systematic persecution of Palestinian Muslims who had to abandon their homes and migrate,” the document states.

The document discloses the history of Islamic State dating back to the early 1990s and explains why in 2011 its leader, Abu Bakr al- Bagdhadi, unleashed car bombs to avenge Osama bin Laden’s death, and boasts about the suicide rates of American soldiers.

“Urban centers across Iraq exploded with car bombs and IED’s. The losses inflicted upon Americans, apostates, and heretics were unprecedented, as were the suicide rates amongst U.S soldiers,” the document states. “This state of affairs forced Mule of the Jews, U.S President Obama to announce an exit plan.”

The battle plan to “end the world” is described in six phases (three of which have already passed) – ripping pages from al-Qaeda’s original plans to defeat the west, in a graphic illustration of how ISIS sees itself as the true heirs to Osama Bin Laden’s legacy.

The document urges followers of al-Qaeda and the Taliban to join the Islamic State in overthrowing Arab governments who have relations with the U.S. and Israel, unlike al-Qaeda, which believed it was “important to weaken the U.S before launching an armed revolt in Arab states and establishing a caliphate.”

In response to the document, a senior ranking Israeli official said that in the Middle East the world faces two threats – from Islamic State and from Iran. “We need not strengthen one at the expense of the other. We need to weaken both and prevent the aggression and arming of both,” he warned.

Alistair Baskey, deputy spokesman for the White House’s National Security Council said Islamic State is being monitored “closely to see whether their emergence will have a meaningful impact on the threat environment in the region.”

The document builds on evidence that Islamic State is expanding into the region where the September 11 attacks were born. A united Taliban, backed by the hundreds of millions of dollars of Iraqi oil revenue now enjoyed by Islamic State, would be a “game-changer,” officials said.

The document warns that “preparations” for an attack in India are underway and predicts that an attack will provoke an apocalyptic confrontation with America: “Even if the U.S tries to attack with all its allies, which undoubtedly it will, the (entire global Muslim community) will be united, resulting in the final battle.”

A war in India would magnify Islamic State stature and threaten the stability of the region, said Bruce Riedel, a senior fellow with the Brookings Institution who served more than 30 years in the CIA. “Attacking in India is the Holy Grail of South Asian jihadists.”

Pakistan Foreign Secretary Aizaz Chaudhry denied the presence of Islamic State in the region, calling it only “a potential threat.”

Unlike al-Qaida, whose focus was the United States and other western nations, the document said Islamic State leaders believe that’s the wrong strategic goal. “Instead of wasting energy in a direct confrontation with the U.S., we should focus on an armed uprising in the Arab world for the establishment of the caliphate,” the document said.

The failure to target the radical Islamic ideas has given the group breathing room to spread throughout the world much like Hitler did.

“We did a lousy job predicting what Hitler was going to do in the 1920s, 1930s – honestly, we blew it,” Cooper said. “It’s hard to take seriously or believe that such hatred was real or would be possible. They made jokes about Jews, degraded Jews but nobody believed that they would be capable of what they were saying.  So now, when groups, like [Islamic State] come along and say they are going to do A B and C, you have to take them for their word.” source

Tags
A Brief History of the Islamic State CaliphateHitlerISISMein Kampf