Givati Brigade commander Col. Ofer Winter told the weekly publication Mishpacha that he “witnessed a miraculous occurrence, the likes of which he had never seen before during his military... 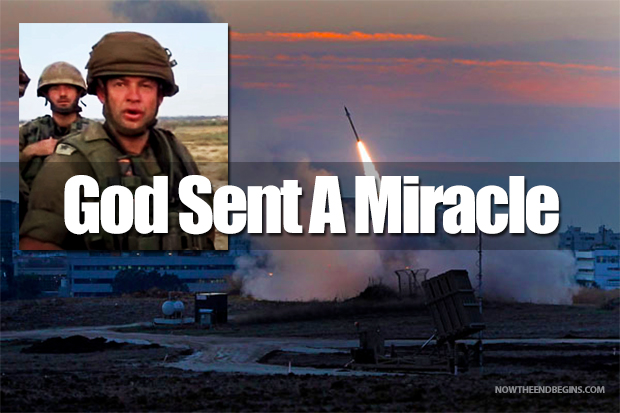 Givati Brigade commander Col. Ofer Winter told the weekly publication Mishpacha that he “witnessed a miraculous occurrence, the likes of which he had never seen before during his military career.”
by Geoffrey Grider August 7, 2014
NOW THE END BEGINS SHARE:

An Israeli commander claimed that hundreds of Israeli lives were saved recently when “the hand of God” stopped a Hamas rocket.

“For the LORD your God is he that goeth with you, to fight for you against your enemies, to save you.” Deuteronomy 20:4

A missile was fired from Gaza. Iron Dome precisely calculated its trajectory. We know where these missiles are going to land down to a radius of 200 meters. This particular missile was going to hit either the Azrieli Towers, the Kirya (Israel’s equivalent of the Pentagon) or [a central Tel Aviv railway station]. Hundreds could have died.

Givati Brigade commander Col. Ofer Winter told the weekly publication Mishpacha that he “witnessed a miraculous occurrence, the likes of which he had never seen before during his military career.”

Suddenly, Iron Dome (which calculates wind speeds, among other things) shows a major wind coming from the east, a strong wind that … sends the missile into the sea. We were all stunned. I stood up and shouted, ‘There is a God!’

One Hamas member was asked why they couldn’t aim their rockets better and actually hit an Israeli target. He responded: “We do aim them, but their God changes their path in mid-air.”

Givati Brigade commander Col. Ofer Winter told the weekly publication Mishpacha that he “witnessed a miraculous occurrence, the likes of which he had never seen before during his military career.”

Winter indicated a predawn raid intended to use darkness as cover was delayed, forcing the soldiers to move toward their objective as sunrise was approaching. With the troops in danger of being exposed at daybreak, Winter explained how heavy fog quickly descended to shroud their movements until their mission was accomplished.

“Suddenly a cloud protected us,” he said, referring to clouds the Bible says guided the ancient Israelites as they wandered in the desert. “Clouds of glory.”

Winter said only when the soldiers were in a secure position, the fog finally lifted. “It really was a fulfillment of the verse ‘For the Lord your God is the one who goes with you to give you victory,’” he said, quoting Deuteronomy 20:4.

The first prime minister of Israel, David Ben Gurion, said this once: “In Israel, in order to be a realist, you must believe in miracles.” There are in fact hundreds of stories of the 1967 and 1973 wars Israel engaged that told of God’s intervention.

The Jewish nation’s existence for six millennia is a miracle. There is no single Jewish life without a miracle. Miracle is an essential part of our belief; it is a gem of Jewish folklore. It is a source of our hope in the dark, and it is a gift of our dreams. And we know why – because these miracles are true.