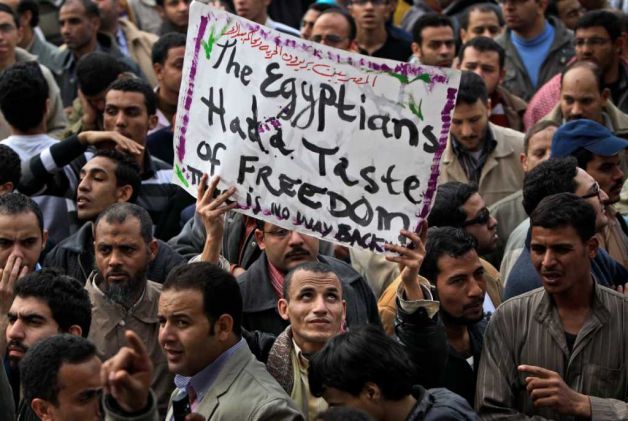 Crowds gathered in Tahrir square in Cairo to listen to Mubarak speech booed and chanted, "“Go, go, go! We are not leaving until he leaves!”
by Geoffrey Grider February 1, 2011
NOW THE END BEGINS SHARE:

Iran’s Foreign Minister Ali Akbar Salehi addressed events unfolding in Egypt on Iranian state television today. He praised the Egyptian people for the great revolution taking place there and suggested that they are playing their part in “creating an Isalmic Middle East for all freedom, justice and independence seekers.” It’s no surprise that words of approval for Egypt were paired with harsh criticism of the United States for meddling in Egypt’s national affairs, accusing the U.S. of playing “direct interference.” The very disturbing anti-Israel tone emerging within Egypt was echoed by Salehi, declaring that the people of Egypt “are no longer ready to stand idle in [the] face of crimes by the Zionist regime.”

A statement signed by 214 Iranian legislators announced their “strong support for the Egyptian nation’s uprising and movement against the tyranny of the country’s rulers,” according to the semi-official Fars News Agency.

They declared that the revolutionary movement in Egypt is a spiritual one, emphasizing Islamic values.

The military advisor for the Islamic Republic, Major General Yahya Rahim Safavi, warned Egyptian President Hosni Mubarak that he will face a fate similar to that of Iran’s ex-Shah, who was toppled in the Islamic Revolution in 1979.  source: Israel National News

Hosni Mubarak announced today that he would not run for reelection in the fall, but that he would remain in power until then. He is currently refusing to leave vowing that he will “die on Egyptian soil.” Crowds in Egypt are not backing down, demanding that he get out, chanting “Out, out, out! We are not leaving until he leaves!”

Be careful what you vow Mr. Mubarak.