Daylight has arrived after the massive explosion in the Chinese port of Tianjin, and reveals nothing but devastation, or as the following tweet from Offbeat China describes it, "a... 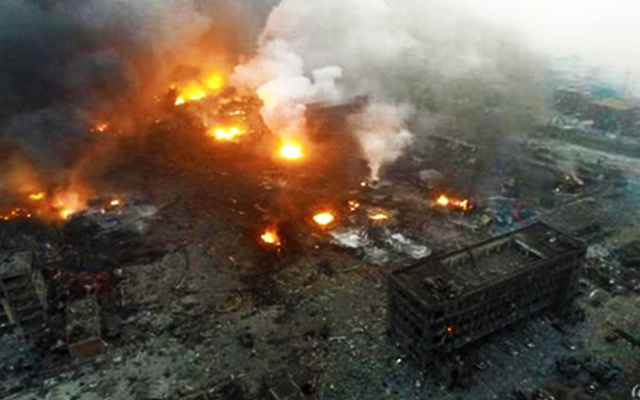 Daylight has arrived after the massive explosion in the Chinese port of Tianjin, and reveals nothing but devastation, or as the following tweet from Offbeat China describes it, “a warzone”

According to the latest report from Xinhua, following the series of enormous explosions at an industrial area in Tianjin, at least 44 people were dead including 12 firefighters, with at least 520 injured, 66 of which in critical condition.

According to an AFP reporter at the scene there was shattered glass up to three kilometres (two miles) from the blast site, after a shipment of explosives detonated in a warehouse, raining debris on the city and starting huge fires. As the Tweet at the bottom of this article shows, the heat was so intense it melted hub caps.

For obvious reasons the local authorities are keeping complete silence on the question of what toxins may have been released after the explosion.

“The fireball was huge, maybe as much as 100 metres tall,” said 27-year-old Huang Shiting, who lives close to the site. “I heard the first explosion and everyone went outside, then there was a series of more explosions, windows shattered and a lot of people who were inside were hurt and came running out, bleeding.” 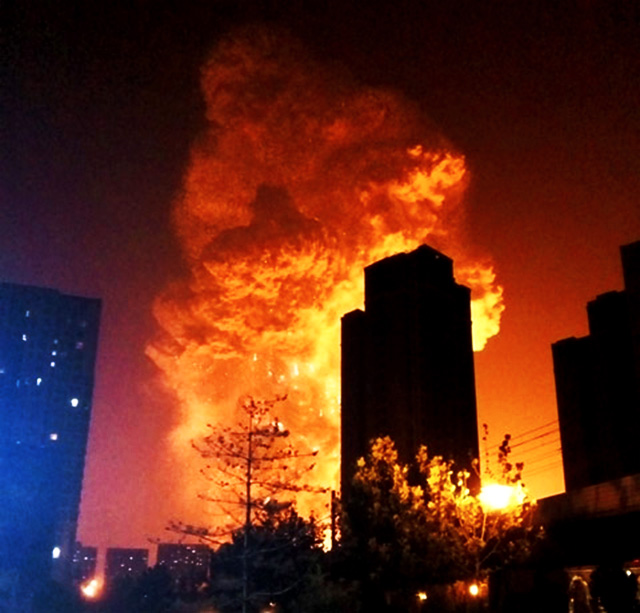 Reports say that the blast was so powerful it created a mushroom cloud and triggered an earthquake that was felt up to six miles away.

AFP further reports that paramedics stretchered the wounded into the city’s hospitals as doctors bandaged up victims, many of them covered in blood after the impact of the explosion was felt for several kilometres, even being picked up by a Japanese weather satellite.

The magnitude of the first explosion was the equivalent of detonating three tonnes of TNT, the China Earthquake Networks Centre said on its verified Weibo account, followed by a second blast equal to 21 tonnes.

Police took into custody the head of the company involved, Tianjin Dongjiang Port Rui Hai International Logistics, local authorities said. Communist Party newspaper the People’s Daily said in a social media post that there were people trapped by the fire, but CCTV said efforts to put out the blaze had been suspended as it was not clear what dangerous items remained in the storage facility.

Specialised anti-chemical warfare troops were being sent to the site, the broadcaster added.

Which brings up the question of just what toxic pollutants are currently floating in the air: according to China Youth Daily, the possibility of there being cyanide at the accident site in Tianjin cannot be ruled out. 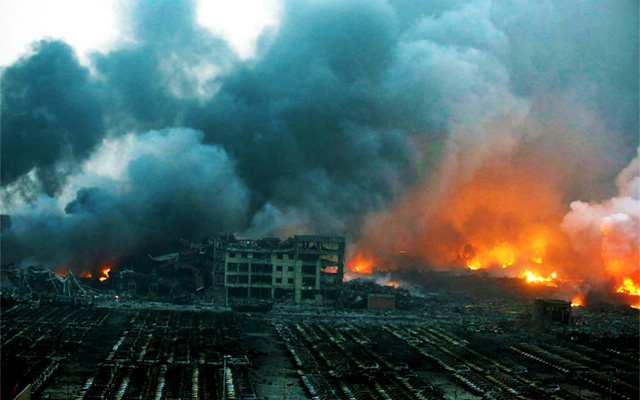 Complete and utter devastation around the massive blast area.

The newspaper quoted Doctor Wu Chunping’s saying that the commodities stored at the explosive warehouse include hazardous chemicals such as sodium cyanide and toluene diisocyanate which can penetrate into human bodies through the skin and cause poisoning. Dr. Wu suggested preventive measures be taken. People should better wear gas masks so as not to expose their mouths and skin, he said.

Tianjin explosion so infernal even wheel hub melt away http://t.co/a1EjD52rsE via Weibo pic.twitter.com/N6m4wwvyhx

Wu explained that a single hazardous chemical explosion can be relatively easily targeted, while the situation in the Tianjin accident on Wednesday is different and more difficult to handle because it involved many varieties of hazardous chemicals.

In addition, a variety of hazardous chemicals will interact after the explosion to form more stable and more complex compounds and produce other toxic substances that fill the air and are difficult to dispel. Therefore, the follow-up work must include physical protection, Dr. Wu said.

For obvious reasons the local authorities are keeping complete silence on the question of what toxins may have been released after the explosion. source