If The Confederate Flag Has To Come Down, Then So Does The LGBT Rainbow Flag

If we ban the Confederate flag because a vast minority of Americans associate it with slavery, then in the interest of fairness we must also do that with white... 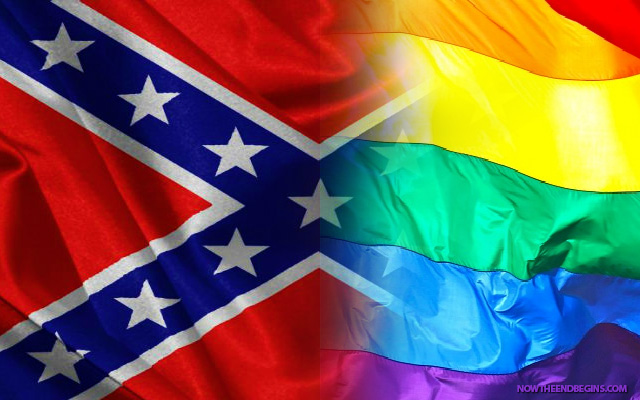 The LGBT demands freedom to think, do, speak and act as they please, but will ill-afford that right to anyone else.

“I do set my bow in the cloud, and it shall be for a token of a covenant between me and the earth. And it shall come to pass, when I bring a cloud over the earth, that the bow shall be seen in the cloud: And I will remember my covenant, which is between me and you and every living creature of all flesh; and the waters shall no more become a flood to destroy all flesh.” Genesis 9:13-15 (KJV)

As the Progressive Left continues it’s chokehold on the US Constitution in general and on the American people in particular, the watercooler debate is now raging over the Confederate flag’s ability to remain flying in the South and wherever else people choose to display it. So let me just start by saying that the Confederate flag is not a “symbol of hate”, it is American history like it or not. The irony here is that the flag represents a time which saw deep divisions in this nation along many lines, the very same divisions that Obama and Company have been so successful in reactivating in 2015.

2 flags, equally hated by tiny minority groups. Either both stay, or both go.

There is another flag that is as equally hated, if not more so, than the Confederate flag and flies in a whole lot more places, the LGBT Rainbow flag. Like the Confederate flag, it represents a vast minority of our population. Statistics show that less than 5% of people in America claim to be gay, lesbian or some mixture thereof. The LGBT Rainbow flag is popping up everywhere you look, and it does not apply to nearly 95% of the country yet no one is calling for it’s removal. Why not? because we are a FREE SOCIETY in which a Constitution, a Bill of Rights and the Declaration of Independence allows for freedom of speech and expression. But free speech and expression is something very much despised by Obama and the Left.

When I look at the Confederate flag, I do not automatically associated it with slavery. Most people think this way. If we ban the Confederate flag because a vast minority of Americans associate it with slavery, then in the interest of fairness we must also do that with white sheets, hot tar, feathers, metal chains and all the other symbols of slavery in early America. While you’re at it, start removing the backs from all public buses because the back of a bus always makes me think of Rosa Parks and her struggle. Better yet, lets outlaw the buying, selling and production of everything related to cotton. See how silly that sounds? Well, it’s every bit as sensible and mature as banning the Confederate flag.

I do not like the LGBT Rainbow flag, to me it’s a symbol of a sinful, wicked world on it’s way to an everlasting Hell. Not only that, it’s stolen from God and the Bible (see verses at top) and that’s plagiarism which is illegal so it’s not just offensive it’s also a crime. Why is no one being prosecuted for this obvious theft of intellectual property? Do you see where I am going with all this? We used to be a free society, we used to be able to express our beliefs and opinions without fear of reprisals. Have we lost that in 2015? Yes, obviously we have.

Ronald Reagan: Freedom is never more than one generation away from extinction

As you read this, our fundamental rights we have long enjoyed as Americans are being ripped out of our hands, and we are being told how to think and how to act. Persecution of Christians in this country is at an all-time high and climbing every week. The LGBT demands freedom to think, do, speak and act as they please, but will ill-afford that right to anyone else. If we allow the Radical Left to force people to take down the Confederate flag while allowing the display of the LGBT Rainbow flag, then we will have crossed a line from which there is no turning back. We will have ceased to be a democratic Republic and will have become a nation of slaves run by tyrants. Banning the Confederate flag is a symptom of the fatal disease of Liberalism.

“Congress shall make no law respecting an establishment of religion, or prohibiting the free exercise thereof; or abridging the freedom of speech, or of the press; or the right of the people peaceably to assemble, and to petition the Government for a redress of grievances.” Amendment 1 to the United States Constitution. Passed by Congress September 25, 1789. Ratified December 15, 1791.

As a Yankee, I have no feelings either way for the Confederate flag, but I say let it fly. No one ever says to ban the Japanese flag because of Pearl Harbor. As a Christian, I strongly dislike the LGBT Rainbow flag and everything it stands for, but I say let that fly as well. Either they both stay up or they both come down. Either we are a free society or we are not, but let’s stop pretending that we still have Freedom of Speech if we do not.

America, the choice is yours. May saner minds prevail.