Four Palestinians in possession of 11 pipe bombs, a homemade pistol and a commando knife arrested at Salem Crossing in northern West Bank; IDF suspects attack was planned against... 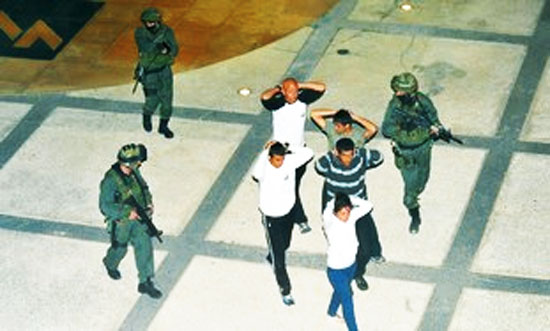 IDF soldiers captured close to a dozen pipe bombs at the Salem Crossing near Jenin in the northern West Bank on Sunday, thwarting what appears to have been a major terrorist attack, possibly against a nearby military court.

Four Palestinians were arrested at the crossing and were found to be in possession of 11 pipe bombs, a homemade pistol and a commando knife. They were transferred to the Shin Bet (Israel Security Agency) for interrogation.

The soldiers shut down the crossing and ordered the Palestinian to undress and discovered three pipe bombs. Another eight were discovered in his bag together with a homemade pistol, several bullets and a commando knife. The four were last in line to enter the Samaria Military Court when one of the soldiers stationed at the crossing, from the Military Police, spotted wires protruding from under his jacket.

“I don’t remember such a large cache of bombs caught on one person,” Lt.-Col. Erez, commander of the Haruv Battalion said. Three other Palestinians who were in line with the man carrying the weapons were also detained. The IDF suspects that the attack was planned against the Samaria Military Court, since the line the Palestinians were standing in only goes into the court and back out.

The thwarted attack came a week after the IDF captured a number of weapons in a home in Kfar Salem, near Nablus, including an M-16 and an Uzi and after the Shin Bet recorded an increase in the number of attacks in December in the West Bank. source – JPost