Barack Obama may not be the Biblical Antichrist, but he sure comes close

I grew up in the semi-rural village of Pompton Lakes, New Jersey back in the 1970’s. In math class, I looked out the window at dairy cows grazing in the fields. It was a very small, quiet, insulated little town where everyone knew everyone else. Amazingly, we were only 27 miles as the crow flies from the largest city in the world, Manhattan. But entering within our borders it could have been the middle of Kansas if you didn’t know better. It was a great place to grow up and I have many wonderful memories of my life there. 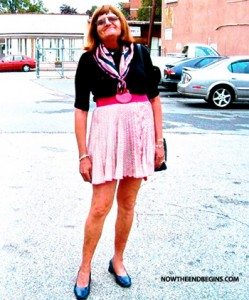 Our main street was filled with the usual assortment of small town characters, with one exception. Roger. Roger Brown was a man who lived in the transient hotel up over the hair salon, and among his many personality quirks and foibles, one stood out from all the rest. Roger liked to wear women’s clothing, kinda like Klinger from MAS*H. Everybody knew who he was, and to a large degree no one bothered him as far as I know. He was never persecuted for his beliefs or taste in clothing. That being said, no one in town thought that how he lived as either an OK thing or a good thing. Christian parents would use him as an illustration to their children of what sin can do to you, and where it can take you.

His lifestyle was given no preference of any kind. When he had to use the bathroom, he went in the Men’s room like every other man in town. No special accommodations for his lifestyle choice, and rightly so. Wearing a dress or having breast implants does not ‘make you a woman’, what you ‘identify as’ is of no consequence. But 7 years ago we elected a man who would not only change the moral fabric of our society, but glorify all manner of sin, filth and perversion.

In 2016 in America, Barack Obama has fundamentally transformed our nation into something unrecognizable

Barack Hussein Obama came out of the end times chute like a bullet, a man seemingly possessed of a single mission to radically transform the moral and ethical fabric of American society. In that regard he has been overwhelmingly successful. Here is the official White House ‘short list’ of his ‘accomplishments’ with regards to installing the LGBT Mafia as the ruling body in American government.

When you view the changes Barack Obama has made in bullet point fashion, the scope and depth is literally breathtaking. Have you ever asked yourself how one of the tiniest population groups in America, the LGBT, who according to government statistics make up only from 3-5% of our overall population, could effect such drastic change? And the amount of the population that ‘identify’ as transgender is smaller still than that. So how can this be happening?

Easy, Barack Obama is their champion, and he is forcing our society to completely rework itself to accommodate the preferences and perversions of the LGBT population. Mark my words, before it’s all over, if it ever is over, the government will call for and get protections for pedophiles and child molesters. They are contained under the LGBT umbrella as well. Obama is using the phony transgender construct to force change and destroy our society from the inside out. And we are letting him do it.

Where is the outrage from Christian America? Where are the million-man protests at the White House? Wake up, wake up!

“Likewise also as it was in the days of Lot; they did eat, they drank, they bought, they sold, they planted, they builded; But the same day that Lot went out of Sodom it rained fire and brimstone from heaven, and destroyed them all.” Luke 17:28,29 (KJV)

Barack Obama may not be the Biblical Antichrist, but he sure comes close. But we strongly believe that God allowed him to become president as a judgment on America for our unwillingness to repent. God has given this nation over, allowing us to heap to ourselves every variety and style of sin we wish to embrace, and then will come on us the same destruction that fell on Sodom and Gomorrah.

So the next time you feel tempted to ‘congratulate yourself’ on how ‘tolerant and accepting’ America has become over the past 7 years, look up, because one day soon our judgment will turn from spiritual to physical, and you will feel what Sodom felt on the day it rained fire and brimstone.