Hillary Flips And Goes Gay Ahead Of 2016 Presidential Run 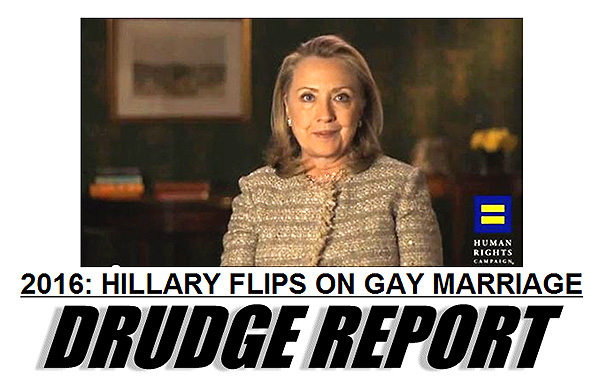 “I believe America is at its best when we champion the freedom and dignity of every human being,’’ Mrs. Clinton said in a video posted Monday on the Internet by the Human Rights Campaign, a gay rights advocacy group. Her announcement comes as the Supreme Court is about to hear two landmark gay rights cases that advocates hope will make same-sex marriage legal in all 50 states.

Mrs. Clinton’s announcement represents a switch in position; as a presidential candidate in 2008, she explicitly opposed same-sex marriage, saying that she favored civil unions but that decisions about the legality of marriage should be left to the states. (Until last year, President Obama took that position as well; the president now favors a right to marriage for gay couples.) But Mrs. Clinton did take steps to protect gay couples when she was secretary of state, work that she said “inspired me to think anew” about the values she holds.

“L.G.B.T. Americans are our colleagues, our teachers, our soldiers, our friends, our loved ones, and they are full and equal citizens and deserve the rights of citizenship,’’ she said in the six-minute video, using the abbreviation for lesbian, gay, bisexual and transgender. “That includes marriage.’’

Mrs. Clinton spoke in the video of the recent wedding of her own daughter, Chelsea, saying, “I wish every parent that same joy.’’

Mrs. Clinton and her family have longstanding ties to the Human Rights Campaign. The group’s president, Chad Griffin, was born in Hope, Ark. – Bill Clinton’s hometown – and got his start in politics volunteering for Mr. Clinton’s 1992 presidential campaign. The former president and Chelsea Clinton expressed their support for same-sex marriage when it was under consideration in the New York State legislature.

And just last week, Mr. Clinton expressed his explicit support for overturning the federal Defense of Marriage Act, the 1996 law — which he signed — that requires the federal government to view marriage as between a man and a woman for legal purposes. source – NY Times