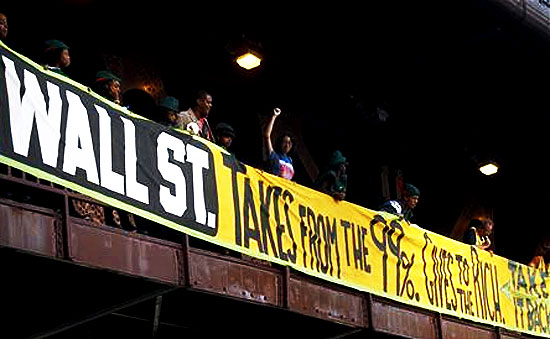 Members of a coalition called "Stand up Chicago" hang a banner from a bridge outside the Mortgage Bankers Association convention in Chicago October 10, 2011. The Wrigley Building is in the background. REUTERS/Frank Polich
by Geoffrey Grider October 10, 2011
NOW THE END BEGINS SHARE:

Bill Ayers would be proud…wait….isn’t he behind this?

George Soros, Bill Ayers, Saul Alinsky, Barack Obama…what do they all have in common? Hmm, let me see…..

Members of a coalition called "Stand up Chicago" hang a banner from a bridge outside the Mortgage Bankers Association convention in Chicago October 10, 2011. The Wrigley Building is in the background. REUTERS/Frank Polich

Chanting “We are the 99 percent” and “Tax, tax, tax the rich,” demonstrators marched on Michigan Avenue and gathered outside the Chicago Art Institute where a U.S. futures industry trade group was holding an evening cocktail reception.

Others marched outside a luxury hotel nearby where the American Mortgage Bankers Association was holding a meeting downtown, attracting a separate band of protesters.

Five separate “feeder marches” — which converged into one giant march up Michigan Ave — were inspired by, but not formally affiliated with, the Occupy Wall Street movement that began in New York last month.

Police estimated 3,000 protesters at the events organized by the “Stand Up Chicago” coalition, with the stated goal of reclaiming “our jobs, our homes and our schools,” according to the group’s website.

Police estimates of the crowds were not available yet. But if the coalition gets the numbers it expects, this would be the biggest Chicago protest since demonstrations focusing on economic inequality began in New York last month.

“We really want to highlight the role the financial industry has played,” said Adam Kader of Arise Chicago, an interfaith workers’ rights group and part of the coalition.

“They’re here in our backyard, so this is the time to send a message about how we’re really hurting,” he added, saying the demonstration would focus on foreclosures, unemployment and lack of municipal funding for key services.

Police arrested 26 demonstrators, many wearing Chicago Teachers Union T-shirts, who linked arms and sat down in Monroe Street as they chanted “Save our schools, save our homes!” They were ticketed and released. Another demonstrator was arrested and faces a charge of battery on a police officer.

Nearby, a crowd chanted “Shame on you!” to members of the Futures Industry Association who peered out from a balcony of the Chicago Art Institute, where they attended a party.

One protester, dressed in a suit, got to a microphone during a panel discussion on Monday and asked Michael Heid, president of Wells Fargo Home Mortgage, a top national mortgage lender: “How do you sleep at night?”

The man asked Heid how could he even visit the Chicago area since so many been affected by foreclosures locally.

Heid answered that he felt like he was before a congressional panel with such a tough line of questioning.

Mortgage Bankers Association CEO David Stevens had advised conference attendees in the morning not to “engage or confront” the protesters, and to use pedestrian tunnels and other means to leave the building if needed.

“We all recognize that our industry faces a trust deficit with policymakers and the public, and that people in our industry contributed to the events that led to the financial crisis,” the Association said in a statement.

Atlanta Mayor Kasim Reed, speaking at an evening event on social trends, said the anti-Wall Street protests were tied to a lack of attention on jobs by Washington politicians.

“It grows out of the anger people feel. People want focus and attention and passion on jobs,” Reed said.

Chicago Mayor Rahm Emanuel, at the same event, said: “There is a major economic restructuring going on where the middle class in this country are feeling an angst they haven’t felt.”

ARRIVING BY THE BUSLOAD

On the streets, despite mostly orderly marching and chants, anger was the common element among the crowds of protesters.

“I’ve got loads of loans,” said Wedad Yassin, a student at Benedictine University in Lisle, Illinois, who was among the protesters. She said she wanted a fairer tax system that “stops putting our taxes toward war” and invests in education.

“Obama talks about there’s going to be some answers to the education problem, but I don’t see it,” Yassin said.

Protesters arrived by the busload, including many Chicago Teachers Union members who climbed off yellow school buses that parked near police barricades.

Andromachi Koumbis, an elementary school teacher, said she showed up because she was unhappy with what she termed “tampering” with the Chicago teachers labor contract that will add hours to the school day. “I don’t mind longer hours if it’s done right,” she said. “It’s funny that they say kids first, and then they bail out big corporations.”

Cary Bunnett, a 52-year-old Chicago electrician, was at the Mortgage Bankers protest and she claimed Bank of America had mishandled her mortgage modification on her $2,500-a-momth home loan. She said she was laid off due to a lack of building activity, which cut her income in half.

“You don’t see any cranes around downtown Chicago anymore,” she said. “There’s no work for me. What am I supposed to do?”

“I’ve stopped making my house payment because I just can’t do it anymore, but they won’t give me the modification they say I qualify for,” Bunnett said.

More demonstrations were planned for the next three days.

Roderick Drew, spokesman for the city’s law department, said protesters had worked with police, who aimed to allow free speech without impairing people’s ability to get around.

Chicago has already several weeks of daily protests outside the Federal Reserve Bank by “Occupy Chicago,” an echo of the larger Wall Street protests. Occupy Chicago demonstrators participated with the Stand Up Chicago marchers on Monday. source- Reuters