Constantine Michalos, head of the Hellenic Chambers of Commerce, said Greek Banks are simply running out of money. "We are reliably informed that the cash reserves of the banks... 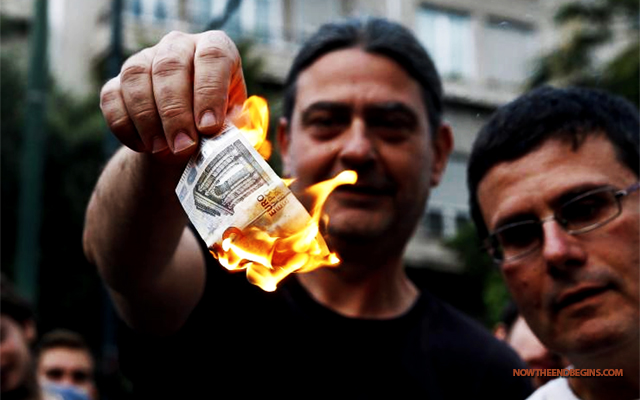 The daily allowance of cash from many ATM machines has already dropped from €60 to €50, purportedly because €20 notes are running out

EDITOR’S NOTE: For Greece, the hour of judgment has arrived. Banks have almost no money left, businesses cannot import raw materials to make or sell merchandise, and merchants refuse to accept credit cards for purchases because they know there is no money to back it up. Greece has collapsed. What will happen next?

Greece is sliding into a full-blown national crisis as the final cash reserves of the banking system evaporate by the hour and swathes of industry start to shut down, precipitating the near disintegration of the ruling coalition.

Business leaders have been locked in talks with the Bank of Greece, pleading for the immediate release of emergency liquidity funds (ELA) to cover food imports and pharmaceutical goods before the tourist sector hits a brick wall.

Officials say the central bank will release the funds as soon as Friday, but this is a stop-gap measure at best. “We are on a war footing in this country,” said Yanis Varoufakis, the Greek finance minister.

The daily allowance of cash from many ATMs has already dropped from €60 to €50, purportedly because €20 notes are running out. Large numbers are empty. The financial contagion is spreading fast as petrol stations and small businesses stop accepting credit cards.

Constantine Michalos, head of the Hellenic Chambers of Commerce, said Greek Banks are simply running out of money. “We are reliably informed that the cash reserves of the banks are down to €500m. Anybody who thinks they are going to open again on Tuesday is day-dreaming. The cash would not last an hour,” he said.

“We are in an extremely dangerous situation. Greek companies have been excluded from the electronic transfers of Europe’s Target2 system. The entire Greek business community is unable to import anything, and without raw materials they can’t produce anything,” he said. source