George Washington’s Warning To America About The Illuminati

"Some even believe we are part of a secret cabal working against the best interests of the United States, characterizing my family and me as 'internationalists' and of conspiring with others around the world to build a more integrated global political and economic structure - one world, if you will. If that's the charge, I stand guilty, and I am proud of it."" - David Rockefeller, from his book "Memoirs".

The bills may say "In God We Trust", but the many arcane symbols that swirl around it let you know that it's not the God of the bible they are referring to.
by Geoffrey Grider May 26, 2014
NOW THE END BEGINS SHARE:

People say that conspiracy theorists are “crackpots” who see a Devil behind every tree. Tin foil hatters awaiting the landings of the alien spaceships. Now, granted, all that makes great fodder by the publishers of cartoon news dumbed-down for idiots. But the truth of the matter, the actual quotes of the ruling elite, would seem to verify and confirm that much of what conspiracy theorists say are indeed quite accurate. Before we give you George Washington’s amazing quote on the Illuminati, here is a brief overview of the situation. Let’s start with billionaire CFR member and New World Order spokesperson David Rockefeller.

“Some even believe we are part of a secret cabal working against the best interests of the United States, characterizing my family and me as ‘internationalists’ and of conspiring with others around the world to build a more integrated global political and economic structure – one world, if you will. If that’s the charge, I stand guilty, and I am proud of it.”” – David Rockefeller, from his book “Memoirs”.

How about this amazing “coincidence”? US President George Bush Sr. giving a speech ten years to the very day before the bombing of the Twin Towers, and calling for the implementation of the New World Order?

The intentions and aspirations of the New World Order magnates and the Illuminati have never been hidden. Listen to this quote given on the very floor of the US Senate in 1950:

“We shall have World Government, whether or not we like it. The only question is whether World Government will be achieved by conquest or consent.” — Statement made before the United States Senate on Feb. 7, 1950 by James Paul Warburg

The New World Order In Your Pocket

Why, even the very dollar bills that are in your pocket right now at this moment bear the signature of the Illuminati cabal that put them there. Have you ever stopped to wonder what all those signs and symbols refer to?

The bills may say “In God We Trust”, but the many arcane symbols that swirl around it let you know that it’s not the God of the bible they are referring to.

1). Novus Ordo Seclorum: A Latin phrase which means “a new order of the ages” is born. Literally, it is calling for a New World Order. – Dictionary.com

2). Annuit Coeptis: A Latin phrase which means “he has favored our undertakings”. – Dictionary.com

3). The Egyptian Pyramid: One of the great Illuminati symbols, the triangle, representing the ancient wisdom of Egypt. In the bible, Egypt is always a type of the unsaved world rebelling against God.

4). The All-Seeing Eye Of Horus: Horus was worshipped in the ancient world as a god of protection, and was often depicted as a falcon swooping in to catch it’s prey. Horus was the child of Isis and Osiris conceived through witchcraft in Egyptian mythology. The symbol of America – the swooping Bald Eagle – was patterned after falcon of Horus.  The All-seeing-Eye is taken from the left eye, the “moon” or “sound” eye of Horus. Horus is a detestable pagan god, the son of Osiris and Isis. There is much pagan Egyptian mythology in the roots of Masonry and Mormonism. So why is it on our dollar bill?

5). 13 Levels: The pyramid has 13 steps, or levels leading up to the capstone. In the bible, 13 is the number for rebellion. America was created when our founding fathers rebelled against King George. 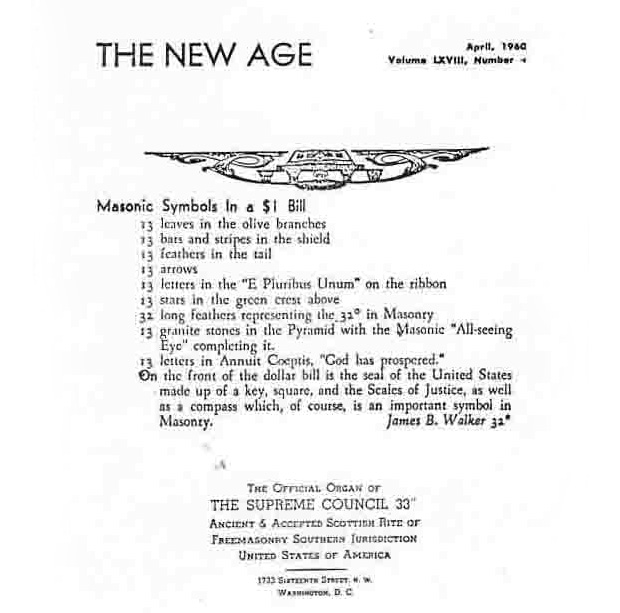 Published in the official magazine of Freemasonry, The New Age, we have a detailed explanation and admission from the Masons that the symbols on the dollar bill are indeed Masonic symbols. They have since changed the name of their magazine to The Scottish Rite Journal. This is something that today’s Masons vehemently try to deny, but the facts are stubborn things.

6). MDCCLXXI: These Roman numerals refer to founding of the Illuminati as an organization on May 1, 1776. This is not a reference to our Independence Day of July 4th, 1776.

8). E Pluribus Unum: Another Latin phrase which means “from many, one”. You will note that this phrase contains exactly 13 letters. Amazing coincidence.

9). A Spiders Web: When you look at the background pattern of the dollar bill, you will clearly see that it is a spider’s web. The spider and the spider web in ancient cultures represented death, treachery and conquest.

10). Olive Leaves and Berries: You will note that the eagle is holding 13 olives leaves with 13 olive berries. The olive leaf is a sign of peace, but the eagle’s claws are closed to represent that these things are being taken away, and not being offered.

So ask yourself this – Why would our founding fathers, and those who have come after, fill our money with the very symbols of the occult from the ancient world? Why do we see this constant reference to hidden and secret societies at the highest levels of our government? We will allow our most famous founding father, and the recognized leader of the new America to have the last word. George Washington warned us many centuries ago that, intertwined in the new birth of America, the seeds of an evil cabal had already been sown with the creation of the Illuminati on May 1, 1776, just two months before we would declare our independence from England. Barack Obama and the Puppet Masters are proof that we have failed to heed that warning.

“It was not my intention to doubt that, the Doctrines of the Illuminati, and principles of Jacobinism had not spread in the United States. On the contrary, no one is more truly satisfied of this fact than I am. The idea that I meant to convey, was, that I did not believe that the Lodges of Free Masons in this Country had, as Societies, endeavoured to propagate the diabolical tenets of the first, or pernicious principles of the latter (if they are susceptible of separation). That Individuals of them may have done it, or that the founder, or instrument employed to found, the Democratic Societies in the United States, may have had these objects; and actually had a separation of the People from their Government in view, is too evident to be questioned.” (George Washington, shortly before he died, read John Robison’s book Proofs of a Conspiracy and immediately expressed his belief to the preacher who had sent it to him, that the designs of the Illuminati were infecting our country. Letter to Reverend G. W. Snyder, Writings of George Washington, p 518-519.)