Government soldiers and rebel gunmen battled in the streets of a key front-line city Saturday after the Libyan military used shelling and guerrilla-style tactics to open its most serious... 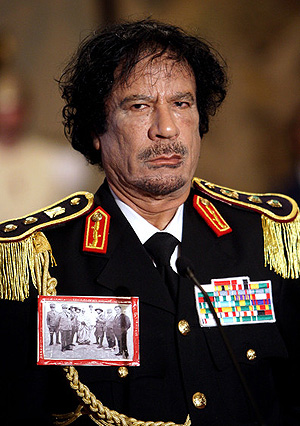 It’s not making NATO and the US look good when their combined air strikes are failing to stop Gadhafi from advancing on the rebels. And it will make them look even worse if he is successful at retaining power in Libya.

AJDABIYA, Libya — Government soldiers and rebel gunmen battled in the streets of a key front-line city Saturday after the Libyan military used shelling and guerrilla-style tactics to open its most serious push into opposition territory since international airstrikes began. NATO airstrikes, meanwhile, hammered at Gadhafi’s ammunition stockpiles and armored forces, destroying 17 tanks. At least eight people were killed in the fighting over Ajdabiya, a hospital official said.

Recapturing the city would give the Libyan military a staging ground to attack the rebels’ main stronghold, Benghazi, about 100 miles farther east along the coastal highway. Moammar Gadhafi’s forces were approaching Benghazi when they were driven back by the international air campaign launched last month to protect civilians and ground Gadhafi’s aircraft.

For the rebels, losing the city would effectively bottle them into a coastal strip of eastern Libya and allow government forces to more tightly squeeze the few opposition pockets in the rest of the country, including the besieged western port of Misrata, where heavy clashes continued Saturday for a second day. NATO air strikes hit armored vehicles firing on civilians near both Misrata and Ajdabiya, said Canadian Lt. Gen. Charles Bouchard, who commands the Libya operation. source – MSNBC