The Bethlehem Call defines Israel as an “illegal regime” and a “crime against humanity”, it promotes “international boycott, divestment and sanctions campaigns” against Israel, labels the more neutral Churches... 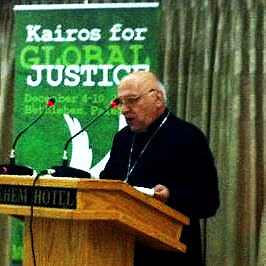 The Bethlehem Call Project is run by wolves in sheep's clothing. Reject it.
by Geoffrey Grider January 17, 2012
NOW THE END BEGINS SHARE:

Not everyone who calls themselves is Christian actually is one

“And unto the angel of the church of the Laodiceans write; These things saith the Amen, the faithful and true witness, the beginning of the creation of God; I know thy works, that thou art neither cold nor hot: I would thou wert cold or hot. So then because thou art lukewarm, and neither cold nor hot, I will spue thee out of my mouth.” Revelation 3:14-16

If you needed further proof that the Laodicean church, warned of in the book of Revelation, is in full bloom right now, then this article should clear up any and all remaining doubt you may have. The World Council of Churches (WCC), boasting a membership of over 349 churches and denominations around the world, hates Israel with a passion and seeks their overthrow. The following was taken directly from documents on their own website:

The Bethlehem Call Project is run by wolves in sheep's clothing. Reject it.

“The Bethlehem Call: The deligitimization and criminalization of the Israeli government and its local and international support base is gaining unstoppable momentum. The existence of international boycott, divestment and sanctions (BDS) campaigns and other forms of nonviolent resistance is an established fact. The government and state of Israel is now regarded as an apartheid regime in terms of international law, with particular reference to the UN Convention on the Suppression and Punishment of the Crime of Apartheid and the Rome Statutes of the International Criminal Court. The severity of the Palestinian situation makes comparisons with apartheid in South Africa superfluous and almost irrelevant. The benchmark is international law and not South Africa.

In the light of the above and with our conviction that Palestine is in an ever deepening crisis, Kairos Palestine urgently calls us to move forward boldly and act radically by speaking out with courage, passion and determination. The time for words and diplomatic niceties, that obscure the reality, are over. We affirm the churches’ commitment to and contributions for decisive action since the Amman Call as well as in the creation and impact of the Palestine Israel Ecumenical Forum (PIEF).” source – World Council of Churches

To our beloved Jewish brothers and sisters living in Israel, let us assure you that no one associated or affiliated with the World Council of Churches is in fact a Christian, and neither does their horrific and repugnant anti-Israel stand represent the cause of Yeshua Ha’Machiac in any way, shape of form. These pseudo-christians, the bible calls them ‘ravening wolves’, are not of God and neither do the follow the bible. What they preach, aside from the hatred of Jews and of Israel, is Replacement Theology, and it is a doctrine of the Devil himself.

From Arutz Sheva: Next March, the Bible College in Bethlehem will host dozens of US theologians, activists and ministries for the “Christ at the Checkpoint 2012 Conference”. It is to be a major religious and political event meant to demonize Israel and to support the Palestinian Intifada against the “ethnocentric” Jewish State.

The impressive range of Christian theologians and pastors from many churches located in the United States make the gravity of the upcoming conference clear. Samuel Rodriguez, President of the US National Hispanic Christian Leadership Conference, is a speaker. Also attending are popular US preacher and “spiritual adviser” to Bill Clinton, Tony Campolo, and President of the World Evangelical Alliance and Asia Evangelical Alliance, Sang-Bok David Kim. Two of the conference organisers, Stephen Sizer and Sami Awad, adamantly defended the Gaza flotilla sent in May 2010 by the Turkish terror group IHH.

Another speaker, Ben White, has shared a political platform with Azzam Tamimi, who has endorsed suicide bombings against Jewish civilians in the past.

In the last few months we have seen an increase of attacks on Israel by many Christian denominations. While the United States is home to millions of Christian supporters of Israel, these are anti-Jewish Churches which are more closely attached to global public opinion, European bureaucracy, the media industry, the United Nations and various legal forums.

In fact, the “Bethlehem Call” manifesto, which serves as platform for the Bethlehem 2012 Conference, has just been published on the websites of the Would Council of Churches, the Global Ministries of the United Church of Christ and the Disciples of Christ.

The Bethlehem Call defines Israel as an “illegal regime” and a “crime against humanity”, it promotes “international boycott, divestment and sanctions campaigns” against Israel, labels the more neutral Churches as “accomplices in crimes against humanity” and attacks Christian Zionism as “a crime and sin as defying the core of the Gospel”.

The Bethlehem Call also updates the “Kairos Palestine”, the major document used as global tool for the Christian struggle against Israel speaking in the behalf of “us Christian Palestinians”. Even the name of the Catholic Custodian of the Holy Land, Pierbattista Pizzaballa, prominently appears among the most important signatures in this website: http://www.kairospalestine.ps/sites/default/Documents/English.pdf

In 2007, the World Council of Churches, the umbrella organization of liberal Protestants claiming a membership of 580 million worshippers, also produced the “Amman Call”, which denies Israel’s right to continue to exist as a Jewish State by insisting that millions of Palestinians have the “right of return” to Israel.

In 2008, the World Council of Churches convened a group of Protestant and Catholic theologians to review the underpinnings of Christian attitudes about Israel. The group published the “Bern Perspective”, which, among other things, instructed Christians to understand all biblical references to Israel only “metaphorically”.

The theological meeting also marked a return to “replacement theology”, the medieval view that the Church has replaced the people of Israel in God’s plan and that all biblical references to Israel refer to the “new Israel”—that is, to Christians.

Replacement calumny has changed its language, yet still is basically a death sentence for the Jewish people. Now it is Israelis, like Lucifer, who were God’s chosen but were cast out for their rebellious and evil ways, and deserve to be obliterated from the “Holy Land”, according to this macabre theology. Taken together, it seems these Churches are now breathing new life into a kind of demonology which criminalizes all the Jews living between the Jordan River and the Mediterranean. source – Israeli National News