Eye-Tracking Will Replace Your Computer Mouse

What if you could dramatically speed up your computing by moving your cursor exclusively with your eyes? A company called Tobii is transforming the way we interact with our... 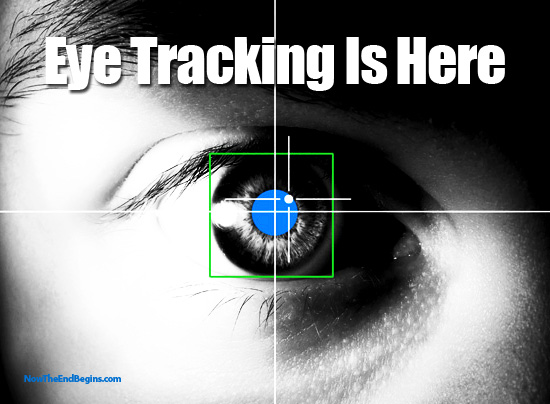 Advances in technology is a good thing. Singularity...not so much.
by Geoffrey Grider January 10, 2013
NOW THE END BEGINS SHARE:

The world is hurtling towards singularity between man and computer

Disguised as an benefit in technology, the unseen “powers that be” are rapidly erasing the line between humans and computers. Things that were considered fantastical 20 years ago barely even illicit much more than a bored yawn from us, the generation that’s “seen it all”. The scary world of the future prophesied by the bible where life is given to the “image of the beast” and it comes alive is almost upon us. Click here to be prepared for what’s coming…

From Yahoo News: What if you could dramatically speed up your computing by moving your cursor exclusively with your eyes? A company called Tobii is transforming the way we interact with our screens.

Advances in technology is a good thing. Singularity…not so much.

By using your eyes instead of your mouse, you can select what you’re looking at almost instantaneously. Not only does this speed up a tremendous number of computing tasks, but it has the potential to reduce repetitive stress injuries.

But Does It Really Work?
Seeing is believing. So I had to test it for myself. I have to admit I was a skeptic. Most gesture and touch controls I’ve tried in the past at the Consumer Electronics Show have been a little clunky. So I was thinking that something as sophisticated as gaze recognition wouldn’t work very well. Boy, was I wrong. After a one-time calibration that took all of 10 seconds, I started looking around the screen. I expected the cursor to go crazy as I scanned from side to side, but the cursor never moved. Instead, as Tobii CEO and Co-Founder Henrik Eskilsson explained to me, the eye-tracking only registers when you hit a function key on the keyboard that they had outfitted with a blue-sticker. As soon as I found a program I wanted to open, I looked at it on the screen and then hit the blue button.

Navigating the operating system was pretty easy, so then I dug into a web page. Look at a link, hit the blue button, and the link opens.  What surprised me was when I read a long article of text, my gaze didn’t move the page or the cursor at all until I was on the line of text lowest on the page. Just as I was about to reach for the mouse to scroll down, the web page automatically scrolled. “How’d it know to do that?” I asked. Henrik explained that the tracker knows you are reading from the motion of your eyes; as your gaze nears the lower edge of the page, it is set to automatically scroll.

Broad Applications
Tobii’s eye-tracking technology was initially designed as a research tool and as an assistive communication device for those with disabilities. Someone without the ability to speak, for example, could communicate by looking at sounds or words on a screen. Now the company is venturing into broad consumer applications. The first generation product that I tried, the Tobii Rex, works only with Windows 8 machines and costs about $1000 for a USB add-on. But as with most new technologies, costs are sure to come down quickly with mass adoption – and I see the potential.

I tried a variety of computing tasks, reading e-mail, mapping, using a calculator, gaming – blowing up Asteroids without a mouse or keyboard – and was impressed by all. Plus, companies like Haier are licensing Tobii’s underlying technology and developing prototype eye-tracking TV controls. Good news, couch potatoes: soon, you won’t even have to move your hands to change the channel.

Predictions
I see a lot of demos, but this one is the real deal. I predict that eye-tracking technology will be baked into the computers we see rolled out at the next Consumer Electronics Show in 2014. source – Yahoo News