Among all Obama’s radical associates from the past, few received more attention or were as shocking as the president’s connection to Bill Ayers. The relationship plagued Obama during... 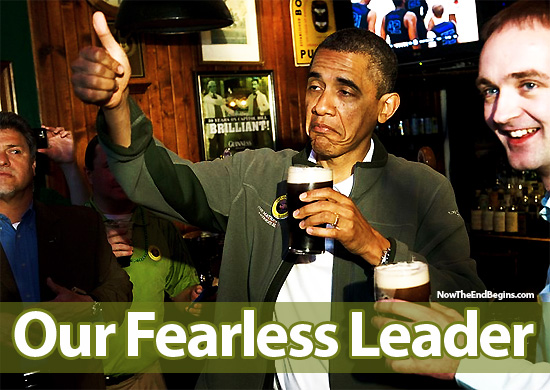 Among Obama's many "firsts" as President we can now add public intoxication to the list. Always a good look for a sitting American leader.
by Geoffrey Grider March 19, 2012
NOW THE END BEGINS SHARE:

Among all Obama’s radical associates from the past, few received more attention or were as shocking as the president’s connection to Bill Ayers.  The relationship plagued Obama during the 2008 presidential campaign and could resurface during this year’s election as many questions remain.

Among Obama's many "firsts" as President we can now add public intoxication to the list. Always a good look for a sitting American leader. Taken March 17, 2012.

Among the possible inquiries: How did the duo originally meet? Did Obama have a larger relationship with Ayers’ parents? Did Ayers play a larger-than-known role in mentoring Obama or in aiding his political career? Are there more projects in which Ayers and Obama worked together? Is there more to find regarding the work of the nonprofits where the two served together?

Obama has never fully addressed the many known aspects of his relationship with Ayers.

During an April 16, 2008, presidential debate, Obama was asked about the relationship.

“This is a guy who lives in my neighborhood, who’s a professor of English in Chicago, who I know and who I have not received some official endorsement from,” Obama said. “He’s not somebody who I exchange ideas from on a regular basis.”

It is known that Obama launched his political career at a 1995 fundraiser at Ayers’ Chicago apartment and that the two served alongside each other from 1995 to 2000 on a $100 million education foundation, the Chicago Annenberg Challenge, or CAC. According to documentary evidence, it was Ayers who helped hire Obama at the CAC.

Also, Obama and Ayers served as paid directors of the Woods Fund, a nonprofit that channeled money to leftist causes.

Obama would later cite his CAC position as evidence of his qualification for public office.

However, those probing Obama were left to speculate exactly how Ayers was so familiar with him that he hired the future politician for the CAC and hosted the 1995 fundraiser.

It would later emerge that Obama worked directly with Ayers in 1988 and that the two were brought together by a radical Saul Alinsky acolyte who was trained by Alinsky himself and whose name was obscured in Obama’s autobiography “Dreams from My Father.”

Alinsky, known for his book “Rules for Radicals,” is regarded as the father of the community organizer movement.

In 1988, in response to a Chicago summit that documented the poor quality of education in the city, Chicago United, a group founded by Ayers’ father, the late Thomas Ayers, formed a community advocacy association called the Alliance for Better Chicago Schools, or the ABCs Coalition. Thomas Ayers was the chairman and CEO of Commonwealth Edison.

When he created the ABCs Coalition in June 1988, Thomas Ayers included Obama in the coalition. Obama at the time was director and lead organizer of the Developing Communities Project, or DCP, an institutionally based community organization on Chicago’s Far South Side. Obama’s first job in Chicago was his DCP position.

The contact for the ABCs Coalition, on which Obama served, was none other than Bill Ayers, who at the time was at the University of Illinois at Chicago.

Obama, meanwhile, took his DCP job in 1985. In “Dreams from My Father,” Obama relates his first job in Chicago as a community organizer and claims the name of his boss at DCP was “Marty Kaufman.”

Kaufman, however, doesn’t exist. The DCP chief at the time was Marty Kellman, who was trained by Alinsky himself, as the book “The Manchurian President” documents.

Additionally, the DCP, with Obama as director, received two grants. One grant was for $40,000 in 1985 and another for $33,000 in 1986 from the Catholic Campaign for Human Development, a group that promoted Alinsky-style organizations.

Working at the Chicago Annenberg Challenge in 1995, Obama had a close relationship with Ayers, according to the CAC’s own archived records. The records also show Obama’s and Ayers’ foundation granted money to radical leftist activist causes.

News reports, archived records, interviews and Ayers’ own curriculum vitae document that Ayers was the founder of the CAC, which billed itself as a school reform organization. Ayers also served as co-chairman of the Chicago School Reform Collaborative, one of the two operational arms of the CAC, from its formation in 1995 until 2000.

In 1995, Obama was appointed as the CAC’s first chairman.

In response to a query by National Review Online writer Stanley Kurtz, the Obama 2008 presidential campaign issued a statement claiming Ayers was not involved with Obama’s “recruitment” to the CAC board. The statement said Deborah Leff and Patricia Albjerg Graham, who served as presidents of other foundations, recruited Obama.

But Kurtz reviewed the CAC archives at the Richard J. Daley Library at the University of Illinois at Chicago, which houses CAC board meeting minutes and other documentation from the education foundation. He found that along with Leff and Graham, Ayers was in a working group of five people who assembled the initial board of the CAC, which hired Obama.

“Ayers founded CAC and was its guiding spirit. No one would have been appointed the CAC chairman without his approval,” Kurtz wrote in a Wall Street Journal opinion piece.

Indeed, several articles in 1994 and 1995 in the Chicago Tribune detailed Ayers’ extensive work to secure the original grant for the CAC from a national education initiative by Ambassador Walter Annenberg, as well as Ayers’ molding of the CAC guidelines. It would have been unusual for Ayers not to have been involved in the selection of Obama.

Kurtz reported that the CAC archives demonstrated Obama and Ayers worked as a team to further the foundation’s agenda. Obama was in charge of fiscal matters, while Ayers’ position was more concerned with shaping educational policy.

The documents showed Ayers served as an ex-officio member of the board that Obama chaired through the CAC’s first year. Ayers also served on the board’s governance committee with Obama, and worked with him to craft CAC bylaws, according to the documents.

Ayers made presentations to board meetings chaired by Obama. Ayers also spoke for the Chicago School Reform Collaborative before Obama’s board, while Obama periodically spoke for the board at meetings of the collaborative, the CAC documents reviewed by Kurtz show.

According to the documents, the CAC granted money to far-left causes, such as the now-defunct Association of Community Organizations for Reform Now, or ACORN, which, WND previously reported, had done work on behalf of Obama’s presidential campaign.

WND broke the story that while Obama chaired the board of the CAC, more than $600,000 was granted to an organization founded by Ayers and run by Mike Klonsky, a former top communist activist. Klonsky was leader of the Marxist-Leninist Communist Party, which was effectively recognized by China as the all-but-official U.S. Maoist party.

Confirms Kurtz: “Instead of funding schools directly, [the CAC] required schools to affiliate with ‘external partners,’ which actually got the money. Proposals from groups focused on math/science achievement were turned down. Instead CAC disbursed money through various far-left community organizers, such as ACORN.”

In 1995, the year Ayers founded the CAC, he gave an interview for author Ron Chepesiuk’s book “Sixties Radicals” in which Ayers stated, “I’m a radical, leftist, small ‘c’ communist.”

Kurtz notes that in his book “Teaching Toward Freedom,” Ayers states his goal is to “teach against oppression,” which Kurtz noted Ayers defines as “against America’s history of evil and racism, thereby forcing social transformation.”

The CAC, however, was not Obama’s only working relationship with the unrepentant terrorist, Ayers.

In a widely circulated article, WND first reported Obama served on the board of the Woods Fund, a liberal Chicago nonprofit, alongside Ayers from 1999 to Dec. 11, 2002, according to the Fund’s website. Tax filings show Obama received compensation of $6,000 per year for his service in 1999 and 2000.

The two appeared together as speakers at several public events, including a 1997 University of Chicago panel titled “Should a child ever be called a ‘super predator?’” and another panel for the University of Illinois in April 2002 titled “Intellectuals: Who needs them?”

Ayers has written about his involvement with the Weather Underground’s bombings of the New York City Police headquarters in 1970, the Capitol in 1971 and the Pentagon in 1972.

“I don’t regret setting bombs. I feel we didn’t do enough,” Ayers told the New York Times in an interview released – ironically – on Sept. 11, 2001.

“Everything was absolutely ideal on the day I bombed the Pentagon,” Ayers wrote in his memoirs, titled “Fugitive Days.” He continued with a disclaimer that he didn’t personally set the bombs, but that his group set the explosives and planned the attack. source – WND