Exclusive Interview With CBN’s Erick Stakelbeck On The Muslim Brotherhood 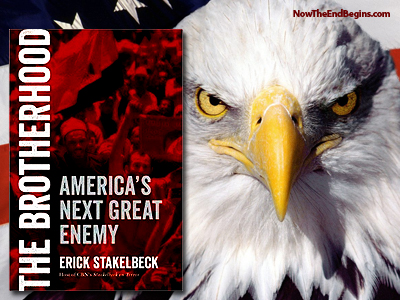 Join us Sunday night, July 21st, as NTEB Radio presents a live, exclusive interview with best-selling author and Islamic terrorism expert Erick Stakelbeck. Click here to participate in a live chat room and have the opportunity to call in as Erick answers your questions on Islamic terrorism. Show begins at 9:00 PM EST.

The Muslim Brotherhood, or Ikhwan, has engaged in terrorism, assassinations, and anti-Western, anti-Semitic rhetoric and violence for almost a century—yet few Americans realize how powerful they really are. While we focus on al Qaeda, Hamas, and Hezbollah, it’s actually the Muslim Brotherhood, the world’s oldest, most influential, and most anti-American Islamist group, that has become the preeminent voice and power in the Muslim world.

Hiding behind a cloak of respectability and expensive Western suits, the Muslim Brotherhood is installing vehemently anti-American governments and power structures throughout the Middle East and the world, as we sit back and cheer for the “democracy” of the Arab Spring.

In his new book, The Brotherhood: America’s Next Great Enemy, Erick Stakelbeck teaches us the frightening truth about this dangerous group, from his first-hand experiences investigating the Brotherhood for eleven years, interviewing its members and visiting its mosques and enclaves.

In The Brotherhood, Stakelbeck:

With Middle Eastern unrest only growing hotter, and saber-rattling at the West only growing louder, the Muslim Brotherhood’s growing global clout will remain on the front burner of American national security challenges. Revealing and disconcerting, The Brotherhood is a must-read for every American hoping to remain in a free America.

CLICK HERE to order your copy of THE BROTHERHOOD

About the author: Stakelbeck has made hundreds of appearances as a commentator on leading national television and radio programs. His appearances include: The O’Reilly Factor, The Sean Hannity Show, Your World with Neil Cavuto, Fox and Friends, America’s Newsroom, America Live with Megyn Kelly, CNN Newsroom, The Savage Nation, BBC, Al Hurra and many others.

Listen to our exclusive interview with Erick!:

Listen to internet radio with NTEB on BlogTalkRadio

From 2003 to 2005, Stakelbeck worked as a senior writer and analyst at the Investigative Project on Terrorism, a counterterrorism think tank founded by terrorism expert Steven Emerson. His articles on Islamic extremism, global terrorism and national security appeared in the Wall Street Journal Europe, Weekly Standard, Washington Times, New York Post, Jerusalem Post, and National Review Online, among other publications.

Stakelbeck has delivered addresses at several public forums, including events for Christians United for Israel (CUFI), ACT for America, the U.S. Department of Homeland Security, the American-Israel Public Affairs Committee (AIPAC), the International Israel Allies Caucus Foundation (IIACF), the Jewish Institute for National Security Affairs (JINSA), the Values Voter Summit and the Faith and Freedom Coalition, among others, on terrorism and Middle East-related issues. source – CBN