Egypt Crowds Unmoved By Mubarak’s Vow Not To Run

CAIRO – President Hosni Mubarak announced Tuesday he will not run for a new term in September elections but rejected protesters' demands he step down immediately and leave the... 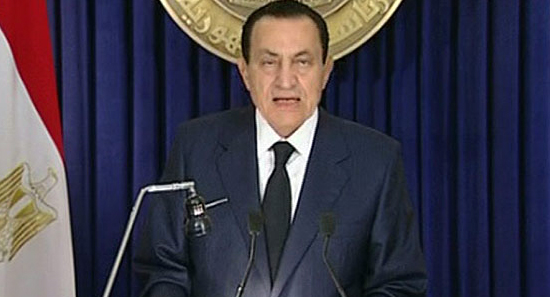 As we have previously reported, Egyptian President will not serve his full term that ends in September. Rioters have vowed to not disperse until he is gone.

CAIRO – President Hosni Mubarak announced Tuesday he will not run for a new term in September elections but rejected protesters’ demands he step down immediately and leave the country, vowing to die on Egypt’s soil, after a dramatic day in which a quarter-million Egyptians staged their biggest protest yet calling on him to go.

Soon after his speech, clashes erupted between protesters and government supporters in the Mediterranean city of Alexandria, and gunshots were heard, according to footage by Al-Jazeera television.

Mubarak’s half-way concession — an end to his rule seven months down the road — threatened to inflame frustration and anger among protesters, who have been peaceful in recent days but have made clear they will not end their unprecedented week-old wave of demonstrations until he is out.

The speech was immediately derided by protesters massed in Cairo’s central Tahrir Square. Watching his speech on a giant TV, protesters booed and waved their shoes over their heads at his image in a sign of contempt. “Go, go, go! We are not leaving until he leaves,” they chanted. One man screamed, “He doesn’t want to say it, he doesn’t want to say it.” source – YahooNews