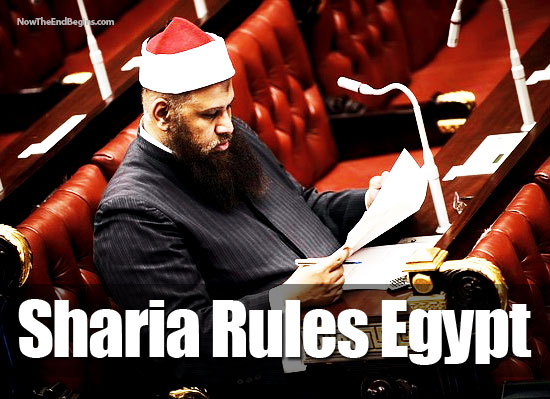 Despite all promises and protests to the contrary, Obama and the Muslim Brotherhood have established Sharia Law as the law of the land in the 'new Egypt'.
by Geoffrey Grider November 30, 2012
NOW THE END BEGINS SHARE:

CAIRO (AP) — Tens of thousands of protesters took the streets in Egypt denouncing President Mohammed Morsi and a draft constitution that his Islamist allies approved early Friday in a rushed, all-night session without the participation of liberals and Christians.

Despite all promises and protests to the contrary, Obama and the Muslim Brotherhood have established Sharia Law as the law of the land in the ‘new Egypt’.

Anger at Morsi even spilled over into a mosque where the Islamist president joined weekly Friday prayers. In his sermon, the mosque’s preacher compared Morsi to Islam’s Prophet Muhammad, saying the prophet had enjoyed vast powers as leader, giving a precedent for the same to happen now.

“No to tyranny!” congregants chanted, interrupting the cleric. Morsi took to the podium and told the worshippers that he too objected to the language of the sheik and that one-man rule contradicts Islam.

Crowds of protesters marched from several locations in Cairo, converging in central Tahrir Square for what the opposition plans to be the second massive rally in a week against Morsi. They chanted, “Constitution: Void!” and “The people want to bring down the regime.”

The protests were sparked by the president’s decrees a week ago granting himself sweeping powers and neutralizing the judiciary, the last check on his authority. The edicts tapped into a feeling among many Egyptians that Morsi and the Muslim Brotherhood, from which he hails, are using their election victories to monopolize power and set up a new one-party state, nearly two years after the fall of autocrat Hosni Mubarak.

As a result, Egypt has been thrown into its most polarizing and volatile crisis since Mubarak’s ouster. The past week, clashes between Morsi’s supporters and opponents left two dead and hundreds wounded and raised fears of further chaos. The Brotherhood and other Islamists plan their own massive rally backing Morsi on Saturday.

But the sudden adoption of a draft constitution by an Islamist-dominated assembly tasked with producing the document throws the confrontation into a new phase.

The opposition must now decide how to deal with a nationwide referendum on the document, likely to come in mid-December: Boycott the vote to protest what critics call a deeply flawed charter or try to use anger at Morsi rally the public to reject it in the referendum.

The draft constitution has an Islamist bent. It strengthens provisions that set Islamic law as the basis of legislation, gives clerics a still undefined role in ensuring laws meet Shariah and commits the state to enforce morals and “the traditional family” in broad language that rights activists fear could be used to severely limit many civil liberties.

At the same time, it installs new protections for Egyptians against some abuses of the Mubarak era, such as stronger bans on torture and arbitrary arrest. It weakens somewhat what had been the near total powers of the presidency, giving parliament greater authorities.

Almost all liberal and secular members of the assembly had quit in the past weeks to protest what they called Islamists’ hijacking of the drafting process.

As a result, 85 members – almost all Islamists, with no Christians – participated in the session that began Thursday. The voting, which had not been expected for another two months, was hastily moved up to approve the draft before the Supreme Constitutional Court rules on Sunday on whether to dissolve the controversial assembly.

Racing against the clock, the members voted article by article for 16 hours on the draft’s more than 230 articles, passing them all by large margins.

The rush resulted in a process that at times appeared slap-dash. Assembly head Hossam al-Ghiryani doggedly pushed the members to finish.

When one article received 16 objections, he pointed out that would require postponing the vote 48 hours under the body’s rules. “Now I’m taking the vote again,” he said, and all but four members dropped their objections.

In the session’s final hours, several new articles were hastily written up and swiftly voted on to resolve lingering issues. One significant change would reduce the size of the Supreme Constitutional Court by nearly a third to 11 judges, removing several younger, sharply anti-Brotherhood judges.

The voting ended just after sunrise Friday, to a round of applause from the members.

“This constitution represents the diversity of the Egyptian people. All Egyptians, male and female, will find themselves in this constitution,” Essam el-Erian, a representative of the Muslim Brotherhood, declared.

“We will implement the work of this constitution to hold in high esteem God’s law, which was only ink on paper before, and to protect freedoms that were not previously respected,” he said.

But the opposition denounced the vote as a farce.

Among the protesters in Tahrir on Friday, Salwa Mustafa said the constitution was “cooked up.”

“It was very strange the way they voted. None of the 80 had objections, and if one of them did accidently open his mouth, al-Ghiryani is there to shut him up,” said Mustafa, an engineer.

Her daughter, Basma Mohieddin, marching with her, added, “We must not let this charter reach the referendum cause you know that people are easily fooled. We have to stop it right now and cancel it.”

Speaking in an interview on state TV aired late Thursday, Morsi said the constitution’s swift passage was necessary to get Egypt through a transitional period in which there has been no elected lower house of parliament. The courts dissolved the Brotherhood-led lower house elected last winter.

“The most important thing of this period is that we finish the constitution, so that we have a parliament under the constitution, elected properly, an independent judiciary, and a president who executes the law,” Morsi said.

Rights group Amnesty International said Friday that the adopted text of the constitution has provisions that purport to protect rights but instead “mask new restrictions.”

As in past constitutions, the new draft said the “principles of Islamic law” will be the basis of law.

Previously, the term “principles” allowed wide leeway in interpreting Shariah. But in the draft, a separate new article is added that seeks to define “principles” by pointing to particular theological doctrines and their rules. That could give Islamists the tool for insisting on stricter implementation of rulings of Shariah.

Another new article states that Egypt’s most respected Islamic institution, Al-Azhar, must be consulted on any matters related to Shariah, a measure critics fear will lead to oversight of legislation by clerics.

The draft also includes bans on “insulting or defaming all prophets and messengers” or even “insulting humans” – broad language that analysts warned could be used to crack down on many forms of speech.

The draft says citizens are equal under the law but an article specifically establishing women’s equality was dropped because of disputes over the phrasing.

One article underlines that the state will protect “the true nature of the Egyptian family … and promote its morals and values.” The phrasing suggests the state could prevent anything deemed to undermine the family.

“Women, who were barely represented in the assembly, have the most to lose from a constitution which ignores their aspirations, and blocks the path to equality between men and women. It is appalling that virtually the only references to women relate to the home and family,” said Hassiba Hadj Sahraoui, Amnesty’s deputy director for the region.

The draft also preserves much of military’s immunity from parliamentary scrutiny, putting its budget in the hands of the National Defense Council, which includes the president, the heads of the two houses of parliament and top generals.

The committee has been plagued by controversy from the start. It was created by the first parliament elected after Mubarak’s ouster. But a first permutation of the assembly, also Islamist-dominated, was disbanded by the courts. A new one was created just before the lower house of parliament, also Brotherhood-led, was dissolved by the judiciary in June. source – AP