"The Muslim Brotherhood has no shame and Morsi is tearing this country apart." Ahmed Bakr, a member of Egypt's union for doctors said.... 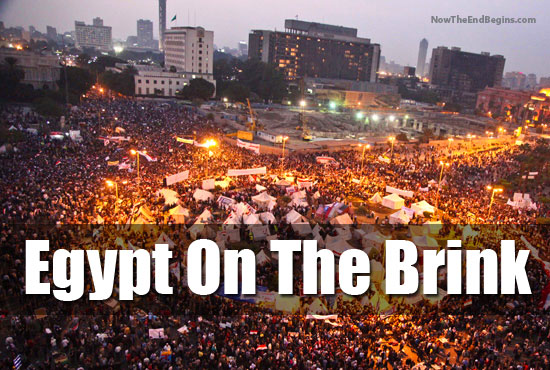 More than 100,000 people took to the streets of Cairo on Tuesday to protest against a decree by the Egyptian president, Mohamed Morsi, that grants him sweeping constitutional powers.

Columns of protesters from all over the Egyptian capital descended on Tahrir Square, the focus of the January 2011 revolution, in numbers that rivalled the rallies in the 18-day protest that toppled the authoritarian ruler Hosni Mubarak.

“Dictator” was the word being used to describe Morsi’s new status after last Thursday’s decree, which grants immunity for the president from judicial review as well as protecting a controversial constitutional assembly dominated by the group he is affiliated with, the Muslim Brotherhood.

“Today’s protests are to overthrow oppression and stand up to the new dictatorship of Morsi, his decree and a constitution far removed from the revolution,” said Haytham Mohamedeen of the Egyptian Revolutionary Socialists movement. “He has to back down. The revolution and the streets will dictate what he will do. If he stands in the way of the revolution, he will share the same fate as Mubarak.”

Other marchers called for Morsi not merely to rescind his decree but to step down from the presidency. The chant of the 2011 revolution – “The people want to bring down the regime” – was echoed in other major Egyptian cities, including Alexandria and Suez.

Muslim Brotherhood headquarters in Alexandria and Mansoura were ransacked and in the case of latter, set on fire, prompting the organisation to formally request the armed forces to protect the main headquarters in Mokkatam in Cairo.

Security Forces at both scenes had apparently refused to intervene.

Clashes also raged in the city of Mahalla between Muslim Brotherhood sympathisers and anti-Morsi protesters, resulting in 300 injuries, while there were also reports of clashes in Port Said.

Earlier, police continuously fired teargas near Tahrir Square while fighting raged with protesters who continued to arrive in large numbers. Among them was Mohamed ElBaradei, the former International Atomic Energy Agency chief who has taken on the role of co-ordinator of a national salvation front set up to unite opposition to the Morsi decree.

“Most political movements have joined a salvation front with a united political bureau,” he said. “What we have failed to do in the past two years, Morsi has achieved with his decree, uniting all of us.

“Our objection is to the decree, irrespective of which president issued it. Killing continues by the ministry of interior, and governments that do this must be removed. We cannot accept any more transgressions, so this may escalate to peaceful civil disobedience.”

On Monday night, after a meeting with the supreme judicial authority, the presidency issued a statement clarifying the decree and stating that Morsi would use the new powers only for “sovereign matters”, which is presumed to mean anything that relates to national security.

A counter-protest planned by the Muslim Brotherhood and other Islamist groups was postponed to avoid confrontation with those inflamed by the perceived power grab. Neither of these concessions was enough to stop the protests.

“Morsi has no credibility any more,” said Mohamed Eissa Moussa, a merchant participating in one of the marches. “He must step down. Neither he nor the Muslim Brotherhood can be trusted any more. He is not working for the revolution but for himself and his brotherhood. Had he been different, I would have supported him.”

Ahmed Bakr, a member of Egypt’s union for doctors, said: “He has appropriated the revolution, and what’s worse, he is claiming it is in the name of the revolution. This is a pivotal moment: if we accept his decree, the revolution is over.

“This isn’t democracy, and their adoption of such a decree is farcical. The Brotherhood have no shame and Morsi is tearing this country apart.”

Tahrir Square was teeming with people even before the separate marches reached the area early in the evening. Adapted anti-Mubarak chants calling for the heads of Morsi and the Brotherhood reverberated from the city’s buildings.

However, the Twitter account of the Muslim Brotherhood’s official English-language website, Ikhwanweb, seemed unperturbed by the numbers out in protest, first dismissing the “low turnout” in Tahrir Square and then stating that opposition forces pleased about 300,000 protesters should brace themselves for the “millions” that would come out in support of Morsi.

Morsi, emboldened by his success on the international stage for in reaching a truce between Hamas and Israel, has defended his decree by stating it was necessary to defend the revolution from remnants of the Mubarak regime.

The number of fatalities in a week of unrest reached four on Tuesday, with news of the death of Fathi Gharib, a member of the Socialist Popular Alliance party, who was reported to have died after inhaling teargas. source – Guardian UK