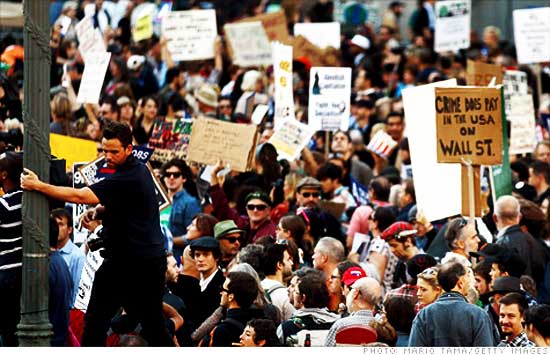 Protesters affiliated with Occupy Wall Street are moving uptown on Tuesday and plan to demonstrate outside of some of New York's richest residents' homes.
by Geoffrey Grider October 11, 2011
NOW THE END BEGINS SHARE:

This is gonna get ugly

Protesters affiliated with Occupy Wall Street are moving uptown on Tuesday and plan to demonstrate outside of some of New York's richest residents' homes.

Why uptown? Because that’s where the rich folks live!

The millionaires and billionaires are being targeted for what event organizers called a “willingness to hoard wealth at the expense of the 99%.”

So far, protesters have not strayed too far from downtown, where a home base of sorts has been established at Zuccotti Park.

Tuesday’s march — organized by UnitedNY, the Strong Economy for All Coalition, the Working Families Party and New York Communities for Change — will cover quite a bit of ground if successful.

The itinerary calls for protesters to hop on the subway, emerging at 59th street near Central Park, where they will start their tour just after noon. Doug Forand, a spokesman for the groups, said that the protesters do not have a permit for the march, but were not planning on obstructing traffic and would stick to the sidewalks. source – CNN Money