CNN Promotes Black Leaders Saying The Washington And Jefferson Monuments Must Come Down, Removal Of The US Constitution Will Be Next

"American history is not all glorious... George Washington was a slave owner. We need to call slave owners out for what they are. Whether we think they were protecting American freedom or not, he wasn't protecting my freedoms," the network contributor said. "To me, I don't care if it's a George Washington statue or Thomas Jefferson, they all need to come down," Rye concluded. Rye's remarks came after Daily Beast editor John Avlon argued Washington spent his life trying to unite the nation. CNN was only too happy to promote these Communist talking points.

Black Commentator Angela Rye on CNN called for statues of George Washington and Thomas Jefferson to come down Thursday on the network.

Communist news network CNN aired a debate back in 2017 promoting the removal of monuments and statues dedicated to Washington and Jefferson, now in 2020 House Speaker Nancy Pelosi is calling for 11 Confederate statues to be removed from the Capitol. A massive rewriting of American history is underway, and when it is finished, the race anarchists will then set their sights on the Declaration of Independence and the United States Constitution as well. After all, our founding documents were written by slave owners, were they not?

“Every record has been destroyed or falsified, every book rewritten, every picture has been repainted, every statue and street building has been renamed, every date has been altered. And the process is continuing day by day and minute by minute. History has stopped. Nothing exists except an endless present in which the Party is always right.” —George Orwell 1984

In a letter sent on Wednesday, Pelosi asked the Joint Committee on the Library — led by Senate Rules and Administration Chairman Roy Blunt, a Missouri Republican, and House Administration Chairwoman Zoe Lofgren, a California Democrat — to direct the Architect of the Capitol to remove the statues of soldiers and officials who represent the Confederacy.

As I have said before, I am a Yankee from the North, but it is disgusting and terrifying the movement underway right now to equate the Confederate flag with Nazism, for it is nothing of the kind. But the rebellion underway by ANTIFA and Black Lives Matter I absolutely do connect with Nazism, especially the Brown Shirt thugs who took down Germany through mob rule. Hitler burned books he disagreed with, now the anarchists want to burn and destroy the things they disagree with. No surprise that this is being promoted by CNN.

FROM REAL CLEAR POLITICS: “American history is not all glorious… George Washington was a slave owner. We need to call slave owners out for what they are. Whether we think they were protecting American freedom or not, he wasn’t protecting my freedoms,” the network contributor said.

“To me, I don’t care if it’s a George Washington statue or Thomas Jefferson, they all need to come down,” Rye concluded.

ANGELA RYE, CNN POLITICAL COMMENTATOR: We have to get to the heart of the problem here. The heart is the way many of us were taught American history. American history is not all glorious. I love John to death, but I couldn’t disagree more about George Washington. George Washington was a slave owner. We need to call slave owners out for what they are. Whether we think they were protecting American freedom or not, he wasn’t protecting my freedoms. I wasn’t someone — my ancestors weren’t deemed human beings. To me, I don’t care if it’s a George Washington statue or Thomas Jefferson, they all need to come down. There is a way to recognize…

I’m not feeding into white supremacy. I’m calling out white supremacy for what it is. And sometimes what it is, John, are blind spots. Sometimes what it is, is not acknowledging this country was built on a very violent past that resulted in death and the rape and the killing of my ancestors. I’m not going to allow us to say it’s OK for Robert E. Lee and not a George Washington. We need to call it what it is. I don’t say they don’t deserve to be taught about. We definitely need to learn about it so we don’t repeat it. We are close to repeating it right now. I’m not giving any deference to George Washington or Robert E. Lee. READ MORE 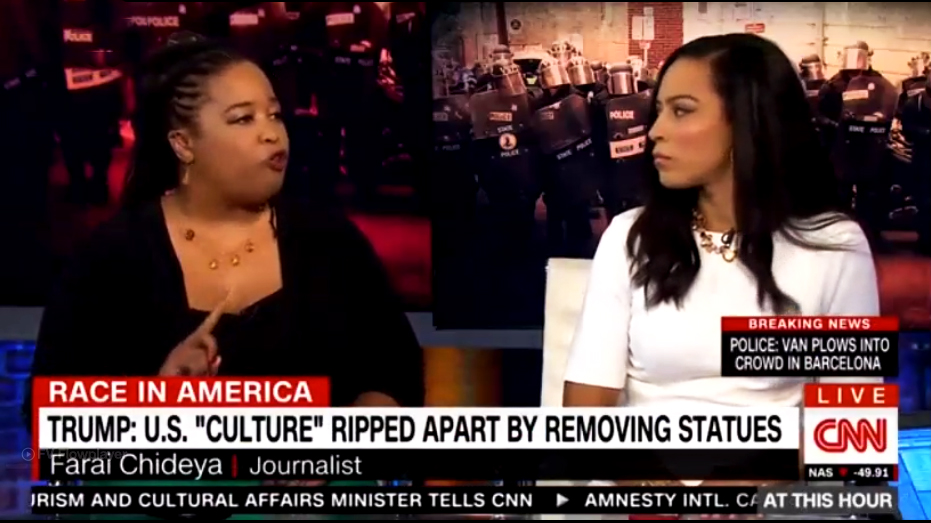 But whatever you do, don’t do nothing. Time is short and we need your help right now. If every one of the 15,242+ people on our daily mailing list gave $4.50, we would reach our goal immediately. If every one of our 150,000+ followers on Facebook gave $1.00 each, we would reach 300% of our goal. The same goes for our 15,900 followers on Twitter. But sadly, many will not give, so we need the ones who can and who will give to be generous. As generous as possible.