Just as the Islamic State ISIS claimed territory in Iraq and Syria, antifa militants have claimed territory in Seattle, Wash. According to reports on the ground from The Post Millennial’s Andy Ngo and Townhall’s Julio Rosas, protesters and antifa instigators have seized land in the Capitol Hill area around the Seattle Police East Precinct. Like ISIS, the rioters appear to have decided on setting up a government in their occupied territory, naming it “Free Capitol Hill.”

The ANTIFA rioters in Seattle appear intent on creating an automonous state, not unlike the ISIS-run territories in the Middle East or the surrounded proto-communist experiment of the Paris Commune in 1871.

As the carnage continues to rise, the dead bodies start piling up, and the hundreds of millions of dollars in damage to America’s cities decimates mostly minority-owned businesses, just keep telling yourself that this is about ‘police brutality’, just keep telling yourself that these actions are to ‘honor the memory’ of George Floyd. Just keep lying to yourself that this is all about freedom and ‘new beginnings’, it’s nothing of the kind. What is happening is as old as mankind itself, it’s wicked sin straight from the tap and stunningly unfiltered. It is wickedness.

“For rebellion is as the sin of witchcraft, and stubbornness is as iniquity and idolatry. Because thou hast rejected the word of the LORD, he hath also rejected thee from being king.” 1 Samuel 15:23 (KJB)

ANTIFA forces have seized a 6-block area in Seattle, including the police station you see in the photo, and their useless, Liberal mayor has ordered law enforcement to stand down and allow the area to be taken. This is happening with consent of the city council. Wrap your head around that one. The bible says that rebellion is just like witchcraft, for it is Lucifer who rebelled against God from the beginning.

ANTIFA is a demonic organization, what will you do when they try and take your town? And since the Liberal fake news media will refuse to report this story, you need to share it with everyone on your social media. Thank you .

Just as the Islamic State ISIS claimed territory in Iraq and Syria, antifa militants have claimed territory in Seattle, Wash. According to reports on the ground from The Post Millennial’s Andy Ngo and Townhall’s Julio Rosas, protesters and antifa instigators have seized land in the Capitol Hill area around the Seattle Police East Precinct. Like ISIS, the rioters appear to have decided on setting up a government in their occupied territory, naming it “Free Capitol Hill.”

Seattle @MayorJenny is allowing a dangerous situation to fester. #Antifa militants have taken over & created an “autonomous zone” in city w/their own rules. Police precinct abandoned. Antifa set up barricades to create a border. Calling for volunteers to provide armed guard. pic.twitter.com/ksQI4NI5kP

His message included tweets from rioters and pictures of the “Free Capitol Hill” poster on the side of a barricade, along with a map of the area antifa had taken over.

“The Capitol Hill Autonomous Zone. Folks in Seattle have secured six block of city [at the moment], barricaded it, and gotten local businesses and residents to agree to, well, disaffiliate from Seattle basically. It’s a flux state in the making,” Alex Humva tweeted.

“Speaker at the autonomous zones advocating folks with firearms take shifts defend the barricades. Sh*t is getting organized,” another inside the barricades tweeted. 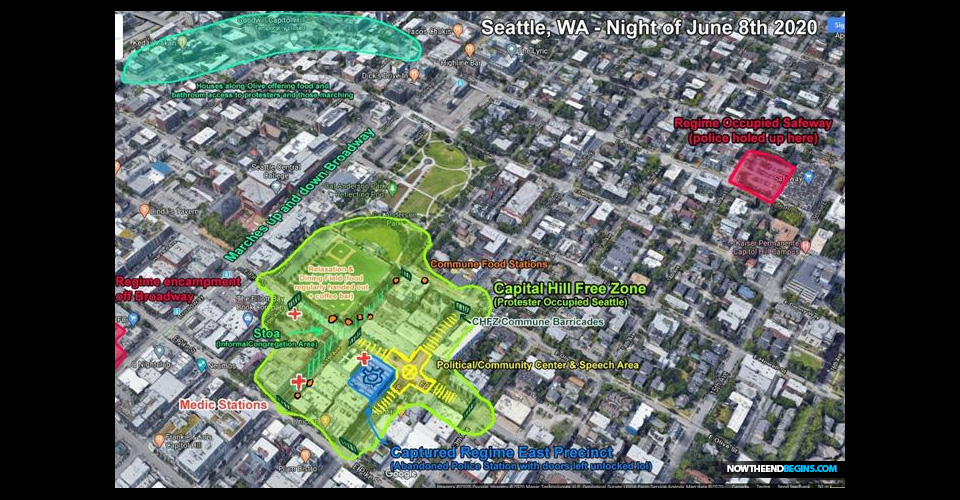 The antifa rioters appear intent on creating an automonous state, not unlike the ISIS-run territories in the Middle East or the surrounded proto-communist experiment of the Paris Commune in 1871. (The Paris Commune was a key moment in the history of socialism and communism. It lasted between March and May 1871, after the Prussians had defeated the French in the Franco-Prussian War and were besieging Paris. Karl Marx called it an example of the “dictatorship of the proletariat.”)

Some of the signs posted around the area. One calls for the defunding of the Seattle PD and the dropping of all charges against protesters. Another says, “The cops will always be racist because capitalism requires inequality.” pic.twitter.com/hhmHL9q113

The rioters’ use of the Greek term “Stoa” appears to hearken back to classical Greece while their reference to police as the “regime” sets them in contrast with a supposedly oppressive government force. The map has an undeniably bohemian theme, promising a “coffee bar” in this militant alt-Seattle.

At some point America will wake up. This is what happens when Democrats run your cities. Highest violent crime and murder rates. pic.twitter.com/BxueZ5IFhS

Julio Rosas also reported from the scene. “I’m outside of the Seattle Police Department’s East Precinct for [Townhall]. Police have pulled out of the area and protesters have set up barricades in the streets. They have declared it a ‘Cop Free Zone,’” he tweeted. READ MORE

But whatever you do, don’t do nothing. Time is short and we need your help right now. If every one of the 15,242+ people on our daily mailing list gave $4.50, we would reach our goal immediately. If every one of our 150,000+ followers on Facebook gave $1.00 each, we would reach 300% of our goal. The same goes for our 15,900 followers on Twitter. But sadly, many will not give, so we need the ones who can and who will give to be generous. As generous as possible.