China’s Military Is Preparing For War In Cyberspace

China’s military is preparing for war in cyberspace involving space attacks on satellites and the use of both military and civilian personnel for a digital “people’s war,” according to... 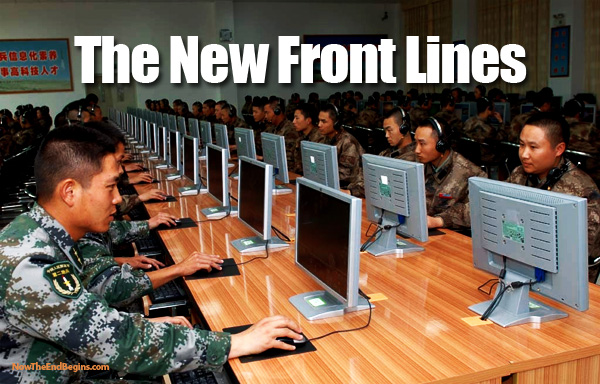 As an unsaved world prepares to go through the coming Great Tribulation, we see that the next great battlefield will be ” in the air”. And no surprise, the Devil is the Prince of the power of the air.

“Wherein in time past ye walked according to the course of this world, according to the prince of the power of the air, the spirit that now worketh in the children of disobedience:” Ephesians 2:2

From WFB: China’s military is preparing for war in cyberspace involving space attacks on satellites and the use of both military and civilian personnel for a digital “people’s war,” according to an internal Chinese defense report.

“As cyber technology continues to develop, cyber warfare has quietly begun,” the report concludes, noting that the ability to wage cyber war in space is vital for China’s military modernization.

“With the reliance of information warfare on space, cyberspace will surely become a hot spot in the struggle for cyberspace control,” the report said.

The new details of Chinese plans for cyber and space warfare were revealed in a report “Study on Space Cyber Warfare” by four engineers working at a Chinese defense research center in Shanghai.

The report presents a rare inside look of one of Beijing’s most secret military programs: Cyber warfare plans against the United States in a future conflict.

“Cyber warfare is not limited to military personnel. All personnel with special knowledge and skills on information system may participate in the execution of cyber warfare. Cyber warfare may truly be called a people’s warfare,” the report says.

A defense official said the report was recently circulated in military and intelligence circles. Its publication came as a surprise to many in the Pentagon because in the past, U.S. translations of Chinese military documents on similar warfighting capabilities were not translated under a directive from policy officials seeking to prevent disclosure of Chinese military writings the officials feared could upset U.S.-China relations.

A Chinese government spokesman could not be reached for comment. However, Chinese spokesmen in the past have denied reports that China engages in cyber attacks.

The study links China’s space warfare development programs with its extensive cyber warfare capabilities. Both programs are considered “trump card” weapons that would allow a weaker China to defeat a militarily stronger United States in a conflict.

Because cyberspace relies on satellites, “space will surely be the main battlefield of cyber warfare,” the report said.

Satellites and space vehicles are considered the “outer nodes” of cyber space and “are clear targets for attack and may be approached directly,” the report said, adding that ground-based cyberspace nodes are more concealed and thus more difficult to attack.

“A space cyber-attack is carried out using space technology and methods of hard kill and soft kill,” the report said. “It ensures its own control at will while at the same time uses cyberspace to disable, weaken, disrupt, and destroy the enemy’s cyber actions or cyber installations.”

The cyber attacks include launching computer viruses, theft and tampering of data, denial of service attacks, and “detonation of [a] network bomb that can instantaneously paralyze or destroy enemy’s information network.”

Hard-kill cyber attack weapons include missiles and other “kinetic” weapons along with directed energy, including lasers, radio frequency weapons, and particle beam weapons.

Chinese cyber warfare capabilities are one of the People’s Liberation Army’s (PLA) most closely guarded secrets, along with its anti-satellite missile and jamming program.

The topic of military cyber warfare was recently discussed by U.S. and Chinese military and defense officials at a meeting earlier this month of the U.S.-China Strategic and Economic Dialogue in Washington.

The Washington Free Beacon obtained a copy of the recently translated report, dated December 2012 and published in the journal Aerospace Electronic Warfare.

The journal is a bimonthly publication of the Institute 8511, part of the China Aerospace Science and Industry Corp. (CASIC), a state-run missile manufacturer and high-technology aerospace research center.

The institute in the past also developed China’s DF-21D anti-ship ballistic missile, a unique weapon that uses precision guidance to attack U.S. aircraft carriers at sea.

The defense official said Institute 8511 is located close to the PLA’s premier cyber warfare headquarters in Shanghai, known as Unit 61398. That unit was identified in a report last February by the security firm Mandiant as the main origin of widespread military cyber attacks on the West.

According to the report, China’s goal for cyber war calls for using high-technology weapons in cyberspace to achieve military objectives.

“Since cyberspace is boundless and transcends land, sea, air, and space, cyber warfare is not constrained by territorial land or territorial sea, and there is no difference between the front and the rear of the battlefield,” the report said. “The advantage of cyber warfare is its global nature; it has global alert, global resources, and global access.”

Additionally, war in cyberspace is not constrained by nighttime, weather, or geography and can be conducted at any time, key factors that have limited conventional warfighting in the past.

In line with Chinese military doctrine that calls for sudden attacks and the element of surprise, the report said cyberwarfare is ideal for rapid attacks that are difficult for an enemy to identify.

“This suddenness can often leave cyber warfare without a trace and without damaging the physical installation or personnel, and yet it can change the trend and outcome of war by affecting the operational effectiveness in an instance.”

The colonels call for new weapons and other military capabilities “to penetrate and to strike as quickly as possible … and ensure that our military will win the warfare under the informatized conditions.”

“Should the United States military’s transformation model of ‘network-centric warfare’ become a success, it will undoubtedly and completely change the mode and means of warfare, making warfare even more sudden and its outcome even quicker to come, generating unmatched asymmetrical advantages,” the colonels said. “This will inevitably greatly strengthen its arrogance, enabling it to have its own way to an even bigger extent and to promote its politics of hegemony.”

Publication of the new cyber warfare report provides a more recent example of the contradiction between internal Chinese military writings and public statements. A 1999 book produced for the Pentagon’s Office of Net Assessment and edited by China specialist Michael Pillsbury first reveals the contradiction.

The book, “Chinese Views of Future Warfare,” influenced many senior Pentagon and military leaders’ views of China by showing that internal Chinese military writings discussed plans for war with the United States, considered China’s main enemy. The writings contrasted sharply with frequent public statements by China that its arms buildup is purely defensive and not directed at any country.

Fisher said the Chinese military understands that U.S. satellites are critical to relaying computer data traffic and are vulnerable to direct attack.

“China has already demonstrated two anti-satellite weapons: ground based lasers in 2006 and then the SC-19 [anti-satellite] missile in 2007. A higher Medium Earth Orbit (MEO) capable ASAT called DN02 may have been tested recently,” Fisher said.

China also is pressing for a space arms agreement at the same time it is building up its space forces, Fisher said.

“The bottom line today is that China’s first priority is building the means to win wars in space while using space diplomacy to disarm its potential enemies,” he said.

The directive outlines the use of military cyber attacks that “can offer unique and unconventional capabilities to advance U.S. national objectives around the world with little or no warning to the adversary or target and with potential effects ranging from subtle to severely damaging.”

A third Chinese document from 2005 that was translated recently by the U.S. government reveals that Chinese military planners are preparing to destroy or disable up to eight Global Positioning System satellites. The satellites are critical for U.S. military precision guided missiles and bombs.