Denver City Councilman Paul Lopez called having Chick-fil-a in the Denver Airport a “really, truly a moral issue on the city.”...

“For this purpose the Son of God was manifested, that he might destroy the works of the devil.” 1 John 3:8 (KJV)

The most amazing thing about the Denver International Airport is not that it is filled to the brim with very freaky occultic symbols everywhere you look, it’s that it is everywhere you look. Instead of trying to hide them, or be clever about it, these works of darkness are on bold display, daring you to figure them out. And there is no question of any kind that all these symbols do indeed tell a story that is yet to be realized. The story of an evil, tragic holocaust. Do I have your attention?

The Denver City Council was speaking truth when they said that it is a “moral issue”. The Denver International Airport is the very symbol of Godlessness itself, and it is no wonder that they would be horrified to have a Christian-based company within their dark borders.

One of the first things you see when you pull up to it is a giant, angry blue horse in the attack position whose eyes glow devil red at night. They have aptly named him Blucifer. The sculptor of this evil creation was killed after Blucifer fell on him, crushing him to death instantly. This is the mascot of the Denver Airport. Is it any wonder to you now why they have soundly rejected the proposal of Christian restaurant company Chick-fil-a to open a store there?

The popular fast-food chain is currently facing a political roadblock in Denver, Colorado. The city’s council has moved to delay Chick-fil-A’s request to lease a location within Denver International Airport (DIA) due to members’ concerns with the company’s stance on same-sex marriage.

According to The Denver Post, several city council members view a potential seven-year concessions deal with Chick-fil-A as a question of ethics. 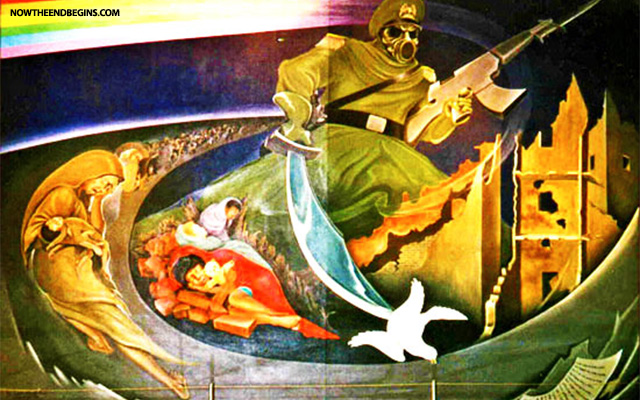 This is just one of the many permanent murals at DIA. A long, long trail of mothers holding dead babies in their arms, many more lying dead on the ground, as a faceless, evil warlord holds a huge sword and a machine gun, thrusting the sword into the belly of the white dove of peace. Notice, too, that the evil warlord doing the killing is a military soldier, a reference to the coming United States police state perhaps? Notice the symbol of the radical Gay Agenda, a multi-colored rainbow, as the banner under which this madman is slaughtering people.

There is such an evil spirit present at the occultic Denver International Airport that having a Chick-fil-a there would be like the Wicked Witch screaming “I’m melting!” when she was doused with the pure water of goodness.

I hope they open a store there soon, pray that they do.