Empowered by Obama's proclamation of June as LGBT Pride Month, major corporations across America are beginning to let their employees know that if they are not fully supportive of... 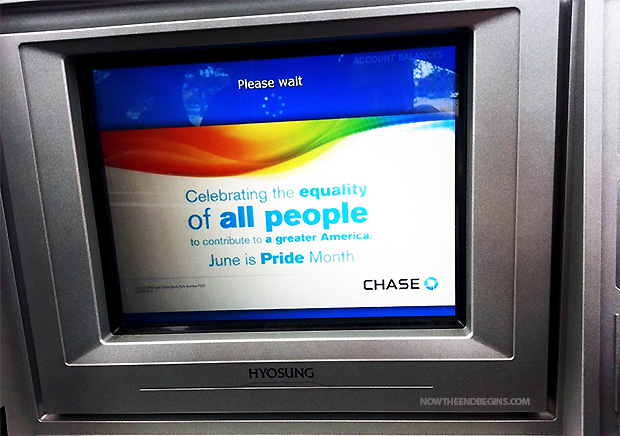 The persecution of non-LGBT friendly people is here

The goals of the LGBT Mafia, so fully and completely support by the Obama administration, have nothing to do with “tolerance” or “acceptance”, but they have everything to do with dominance and control. Empowered by Obama’s proclamation of June as LGBT Pride Month, major corporations across America are beginning to let their employees know that if they are not fully supportive of the LGBT Mafia’s agenda, that their days with the corporation are indeed numbered.

Official USA Census numbers put the number of LGBT people in America at roughly 8% of the general population. So why is 92% of this country forced to read messages like this at the ATM machine?

Stories from all over are beginning to pour in from Fortune 500 companies like Blue Cross, Citi Bank, and other of careers being terminated for not being perceived as an “ally” of the LGBT agenda. And that brings us to this story on the scarily-threatening employee survey sent out to employees of JP Morgan Chase bank last month.

This is the non-anonymous survey that Chase bank demanded their employees answer:

The employee who reported on this survey said “this survey wasn’t anonymous. You had to enter your employee ID. With the way things are going and the fact that LGBT rights are being viewed as pretty much tantamount to the civil rights movement of the mid 50s to late 60s, not selecting that option is essentially saying “I’m not an ally of civil rights;” which is a vague way to say “I’m a bigot.” The worry among many of us is that those who didn’t select that poorly placed, irrelevant option will be placed on the “you can fire these people first” list.”

An interesting item on the JP Morgan website says that they give preferential treatment to the LGBT employees:

If you work in corporate America, be prepared to lose your job if you are not visibly aligned with the demands of the LGBT Mafia. They will not tolerate anything less than a total acquiescence to their perverse agenda.