“I’m a Christian so, as a Christian, there are things like homosexuality that I just can’t condone,” Rau told The Canadian Press. “Unfortunately, we live in a culture where... 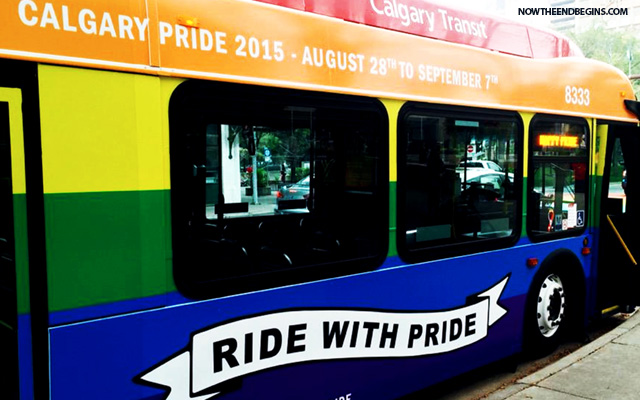 “And be not conformed to this world: but be ye transformed by the renewing of your mind, that ye may prove what is that good, and acceptable, and perfect, will of God.” Romans 12:2 (KJV)

We live in a day and age where Christians no longer stand on Biblical truths and compromise, but not Jesse Rau from Canada. He is a Calgary bus driver who refused to drive his bus when his company had it decorated in LGBT rainbow pride colors. Lose a job because it violates your Christian faith? Yes, that is exactly the type of stance the Bible calls us to make in these last days.

Stay strong, brother, the Lord will provide a better job for you if you get fired. We salute your courageous stance and dearly hope it inspires Christians all across America to do likewise.

“I’m a Christian so, as a Christian, there are things like homosexuality that I just can’t condone,” Rau told The Canadian Press. “Unfortunately, we live in a culture where if you disagree with someone’s lifestyle, the accusation is that you hate the person.”

Rau said he has a family to support (and his young child can in fact be seen in a CTV Calgary report) and is concerned about being out of work.

However he said “If I’m asked to compromise in such a big way for what I believe to be right, yes of course I have to lose my job, there’s nothing else that I can do,” Rau told CTV Calgary. “I’m put in a corner.”

A Calgary Transit spokesperson said drivers can refuse to drive based on safety issues, but that’s about it.

Pride is the original sin of the Devil

To me, it’s amazingly ironic that the LGBT calls what they do the “Pride Movement” because the Bible talks about that very thing. In fact, the Bible says that the “children of pride” have a very special king over them – Satan.

“Out of his mouth go burning lamps, and sparks of fire leap out. Out of his nostrils goeth smoke, as out of a seething pot or caldron. His breath kindleth coals, and a flame goeth out of his mouth. He beholdeth all high things: he is a king over all the children of pride.” Job 41:19-21,34 (KJV)

But I am sure that’s just another “coincidence” found in the Bible.