Sharia! Mustafa Abdul-Jalil, the chairman of the National Transitional Council and de fact president, had already declared that Libyan laws in future would have Sharia, the Islamic code, as... 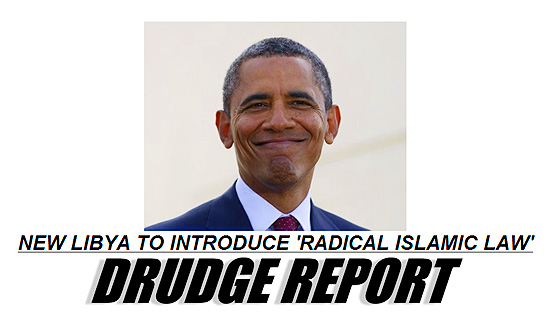 Why is Obama smiling? His brothers are winning...
by Geoffrey Grider October 23, 2011
NOW THE END BEGINS SHARE:

We told you it was coming

“They have said, Come, and let us cut them off from being a nation; that the name of Israel may be no more in remembrance. For they have consulted together with one consent: they are confederate against thee:” Psalm 83:4,5

Why is Obama smiling? His 'change' has finally come.

Mustafa Abdul-Jalil, the chairman of the National Transitional Council and de fact president, had already declared that Libyan laws in future would have Sharia, the Islamic code, as its “basic source”.

But that formulation can be interpreted in many ways – it was also the basis of Egypt’s largely secular constitution under President Hosni Mubarak, and remains so after his fall.

Mr Abdul-Jalil went further, specifically lifting immediately, by decree, one law from Col. Gaddafi’s era that he said was in conflict with Sharia – that banning polygamy.

In a blow to those who hoped to see Libya’s economy integrate further into the western world, he announced that in future bank regulations would ban the charging of interest, in line with Sharia. “Interest creates disease and hatred among people,” he said.

Gulf states like the United Arab Emirates, and other Muslim countries, have pioneered the development of Sharia-compliant banks which charge fees rather than interest for loans but they normally run alongside western-style banks.

In the first instance, interest on low-value loans would be waived altogether, he said.

Libya is already the most conservative state in north Africa, banning the sale of alcohol. Mr Abdul-Jalil’s decision – made in advance of the introduction of any democratic process – will please the Islamists who have played a strong role in opposition to Col Gaddafi’s rule and in the uprising but worry the many young liberal Libyans who, while usually observant Muslims, take their political cues from the West. source – Telegraph UK