Broadcom Unveils A New Microchip That Knows EXACTLY Where You Are

Broadcom has just rolled out a chip for smart phones that promises to indicate location ultra-precisely, possibly within a few centimeters, vertically and horizontally, indoors and out. The unprecedented... 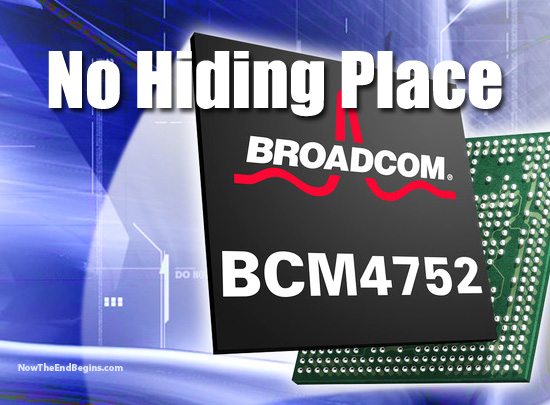 Privacy as you have known it in America is about to disappear. Completely.
by Geoffrey Grider April 10, 2012
NOW THE END BEGINS SHARE:

The day is here where technology exists that will help fulfill the prophecies of the book of Revelation from the holy bible. This is something that no generation in world history has ever been able to say. YOU are living in the time of the end…are you ready for what comes next?

Privacy as you have known it in America is about to disappear. Completely.

From Technology Review: Broadcom has just rolled out a chip for smart phones that promises to indicate location ultra-precisely, possibly within a few centimeters, vertically and horizontally, indoors and out.

The unprecedented accuracy of the Broadcom 4752 chip results from the sheer breadth of sensors from which it can process information. It can receive signals from global navigation satellites, cell-phone towers, and Wi-Fi hot spots, and also input from gyroscopes, accelerometers, step counters, and altimeters. (NOTE: The Broadcom 4752 chip. When you add 4+7+5+2 you get 18. 18 divided is 6+6+6. Just saying…)

The variety of location data available to mobile-device makers means that in our increasingly radio-frequency-dense world, location services will continue to become more refined.

In theory, the new chip can even determine what floor of a building you’re on, thanks to its ability to integrate information from the atmospheric pressure sensor on many models of Android phones. The company calls abilities like this “ubiquitous navigation,” and the idea is that it will enable a new kind of e-commerce predicated on the fact that shopkeepers will know the moment you walk by their front door, or when you are looking at a particular product, and can offer you coupons at that instant.

The integration of new kinds of location data opens up the possibility of navigating indoors, where GPS signals are weak or nonexistent.

Broadcom is already the largest provider of GPS chips to smart-phone makers. Its new integrated circuit relies on sensors that aren’t present in every new smart phone, so it won’t perform the same in all devices. The new chip, like a number of existing ones, has the ability to triangulate using Wi-Fi hot spots. Broadcom maintains a database of these hot spots for client use, but it says most of its clients maintain their own.

A company that pioneered the construction and maintenance of these kinds of Wi-Fi hot spot databases is SkyHook Wireless. Skyhook CEO Ted Morgan is skeptical that Broadcom can catch up to his company’s software-based system allowing for precise indoor location. “Broadcom is just now talking about something we have been doing for seven to eight years, uncovering all the challenges,” says Morgan. These include battery management and cataloging a new wave of mobile Wi-Fi hot spots. “Broadcom has never done major deployment,” adds Morgan.

Scott Pomerantz, vice president of the GPS division at Broadcom, counters that “the big [mobile] operating systems all have a strategy in place” to create their own Wi-Fi databases. Pomerantz isn’t allowed to name names, but one of Broadcom’s biggest customers is Apple, which previously used Skyhook for location services in its iPhone but now employs its own, Apple-built location system.

At least one feature of Broadcom’s new GPS chip is entirely forward-looking, and integrates data from a source that is not yet commercially deployed: Bluetooth beacons. (Bluetooth is the wireless standard used for short-range communications in devices like wireless keyboards and phone headsets.)

“The use case [for Bluetooth beacons] might be malls,” says Pomerantz. “It would be a good investment for a mall to put up a deployment—perhaps put them up every 100 yards, and then unlock the ability for people walking around mall to get very precise couponing information.”

“The density of these sensors will give you even finer location,” says Charlie Abraham, vice president of engineering at Broadcom. “It could show you where the bananas are within a store—even on which shelf there’s a specific brand.” source – Technology Review