BOMBSHELL: Abbas At UN Says Palestine No Longer Bound By Agreements With Israel

Palestinian President Mahmoud Abbas declared before world leaders Wednesday that he is no longer bound by agreements signed with Israel and called on the United Nations to provide international... 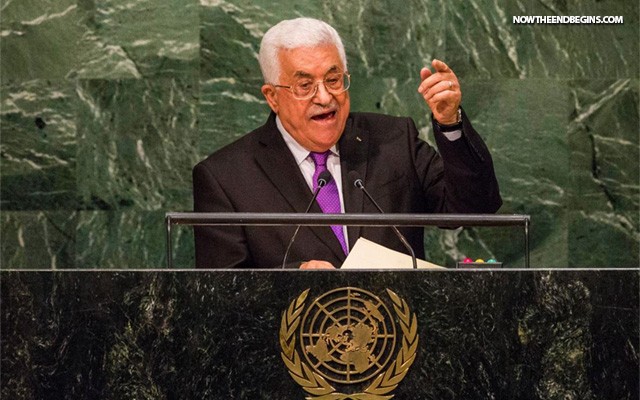 Palestinian President Mahmoud Abbas declared before world leaders Wednesday that he is no longer bound by agreements signed with Israel and called on the United Nations to provide international protection for Palestinians, in the most serious warning yet that he might walk away from engagement with the Jewish state.

“Behold, I will make Jerusalem a cup of trembling unto all the people round about, when they shall be in the siege both against Judah and against Jerusalem. And in that day will I make Jerusalem a burdensome stone for all people: all that burden themselves with it shall be cut in pieces, though all the people of the earth be gathered together against it.” Zechariah 12: 2,3 (KJV)

EDITOR’S NOTE: The real battle for the Bible believer in all this is exactly what the Bible said has always been the issue, and what would be the issue in the last days: Jerusalem. You will pay careful attention to where Abbas says that the flag of Palestine “will be raised soon in Jerusalem, the capital of our Palestinian state.” Wow. Jerusalem has been the capital of Israel since about 1500 BC. At this time we call to your attention the treaty that was signed between Palestine and the Vatican on May 13, 2015. Tick, tock….

In a statement issued by his office, Netanyahu said Abbas’ “speech of lies encourages incitement and unrest in the Middle East.” Netanyahu called on Abbas to “act responsibly” and answer his proposal for direct negotiations with Israel without any preconditions. “The fact that time after time he (Abbas) does not respond is the best proof that he has no intention of reaching a peace agreement,” the statement said.

Abbas’ comments reflect deep frustration, even desperation. It came after years of paralysis in attempts to negotiate Palestinian statehood with Israel and several months after Netanyahu formed a right-wing government that has continued settlement expansion on war-won lands the Palestinians want for their state.

With negotiations frozen, Abbas has failed to come up with a political alternative.

His hopes of creating a Palestinian state through negotiations with Israel have been derailed. A new poll shows that a majority of Palestinians want the 80-year-old leader to resign and dissolve his self-rule government, the Palestinian Authority. Many no longer believe a two-state solution is realistic and support political violence.

Abbas had threatened to drop a “bombshell” in the speech – prompting speculation he would sever ties with Israel over its settlement expansion and other hard-line policies.

On Wednesday, he said that Israel’s refusal to commit to agreements signed “render us an authority without real powers.”

“As long as Israel refuses to cease settlement activities and to the release of the fourth group of Palestinian prisoners in accordance with our agreements, they leave us no choice but to insist that we will not remain the only ones committed to the implementation of these agreements, while Israel continuously violates them,” Abbas said.

“We therefore declare that we cannot continue to be bound by these agreements and that Israel must assume all of its responsibilities as an occupying power,” he declared. He did not elaborate on which agreements.

If Abbas were to go through with his demand that Israel, as the occupying power, assume responsibility for the Palestinians, this would require dissolving the Palestinian Authority and the resignation of Abbas. He didn’t mention any of this in his speech.

In his speech, Abbas accused Israel of “repeated, systematic incursions upon Al-Aqsa Mosque aimed at imposing a new reality,” warning that such actions create an explosive situation.

“It is no longer useful to waste time in negotiations for the sake of negotiations; what is required is to mobilize international efforts to oversee an end to the occupation in line with the resolutions of international legitimacy,” he said. “Until then, I call upon the United Nations to provide international protection for the Palestinian people in accordance with international humanitarian law.”

“This is a threat not a plan,” he said. “Abbas has no plan, otherwise he could have spelled it out in his speech and could have told the world he is going to do this and that and asked them for understanding and support.”

Thousands of Abbas supporters gathered in the city centers in several West Bank cities as they listened to Abbas’ speech. They cheered up when he said he is no longer bound by the signed agreements with Israel, waving Palestinian flags.

In a symbolic moment Wednesday, Abbas raised the flag of the state of Palestine at the United Nations for the first time, with a promise that it will be raised soon in Jerusalem, “the capital of our Palestinian state.”

More than 300 ministers, diplomats and well-wishers crowded into the rose garden at U.N. headquarters where a temporary flagpole had been erected for the ceremony which took place following Abbas’ speech.

In a harshly worded essay ahead of his Wednesday address to the United Nations, the Palestinian president said a new multilateral approach to the Israeli-Palestinian conflict is needed since direct negotiations with Israel have repeatedly failed.

Abbas said the model should be based instead on the type of negotiations that took place in the Balkans, Libya and Iran.

“The peace process must be multilateral. The same pattern of negotiations imposed for years will not work because Israel is the occupying power,” he wrote in an op-ed in The Huffington Post. While Abbas’ Palestinian Authority rules over most of the West Bank Palestinian population, Israel still controls much of the territory. source