Biocryptology Is The Future Of Cashless Transactions

Futurists have long proclaimed the coming of a cashless society, where dollar bills and plastic cards are replaced by fingerprint and retina scanners smart enough to distinguish a living,... 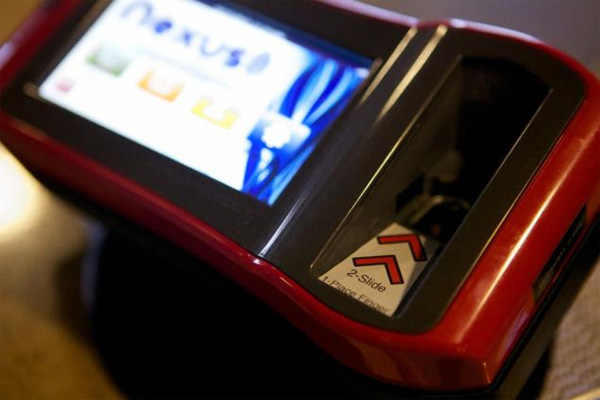 RAPID CITY, S.D. — Futurists have long proclaimed the coming of a cashless society, where dollar bills and plastic cards are replaced by fingerprint and retina scanners smart enough to distinguish a living, breathing account holder from an identity thief.

What they probably didn’t see coming was that one such technology would make its debut not in Silicon Valley or MIT but at a small state college in remote western South Dakota, 25 miles from Mount Rushmore.

Two shops on the School of Mines and Technology campus are performing one of the world’s first experiments in Biocryptology — a mix of biometrics (using physical traits for identification) and cryptology (the study of encoding private information). Students at the Rapid City school can buy a bag of potato chips with a machine that non-intrusively detects their hemoglobin to make sure the transaction is legitimate.

Researchers figure their technology would provide a critical safeguard against a morbid scenario sometimes found in spy movies in which a thief removes someone else’s finger to fool the scanner.

On a recent Friday, mechanical engineering major Bernard Keeler handed a Red Bull to a cashier in the Miner’s Shack campus shop, typed his birthdate into a pay pad and swiped his finger. Within seconds, the machine had identified his print and checked that blood was pulsing beneath it, allowing him to make the buy. Afterward, Keeler proudly showed off the receipt he was sent via email on his smartphone.

Fingerprint technology isn’t new, nor is the general concept of using biometrics as a way to pay for goods. But it’s the extra layer of protection — that deeper check to ensure the finger has a pulse — that researchers say sets this technology apart from already-existing digital fingerprint scans, which are used mostly for criminal background checks.

Al Maas, president of Nexus USA — a subsidiary of Spanish-based Hanscan Indentity Management, which patented the technology — acknowledged South Dakota might seem an unlikely locale to test it, but to him, it was a perfect fit.

“I said, if it flies here in the conservative Midwest, it’s going to go anywhere,” Maas said.

Maas grew up near Madison, S.D., and wanted his home state to be the technology’s guinea pig. He convinced Hanscan owner Klaas Zwart that the 2,400-student Mines campus should be used as the starter location.

“South Dakota is a place where people take risks. We’re very entrepreneurial,” Wright said. After Maas and Zwart introduced the idea to students this winter, about 50 stepped forward to take part in the pilot.

“I really wanted to be part of what’s new and see if I could help improve what they already have,” said Phillip Clemen, 19, a mechanical engineering student.

Robert Siciliano, a security expert with McAfee, Inc., minimized potential privacy concerns. “We are hell bent on privacy issues here in the U.S. We get all up in arms when someone talks about scanning us or recording our information, but then we’ll throw up everything about us on Facebook and give up all of our personal information for 10 percent off at a shoe store for instant credit,” he said.

Jay Stanley, senior policy analyst with the American Civil Liberties Union, said fingerprint technology on its own raises security issues, but he called “liveness detection” a step in the right direction.

“Any security measure can be defeated; it’s a question of making it harder,” he said. The key to keeping biometric identification from becoming Big Brother-like is to make it voluntary and ensure that the information scanned is used exactly as promised, Stanley said.

Brian Wiles, a Miles mechanical engineering major, said it’s exciting to be beta testing technology that could soon be worldwide. “There was some hesitation, but the fact that it’s the first in the world — that’s the whole point of this school,” said Wiles, 22. “We’re innovators.” source – NY Daily News